I have a few books that have been sitting in my review pile for quite some time gathering dust. And since I don't have a ton to say on each of them, I thought a series of mini-reviews would be fitting! 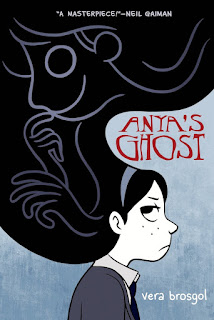 Anya's Ghost by Vera Brosgol is a graphic novel that I read quite a few months ago. I had marked it as something I wanted to get my hands one for quite some time, and after our media specialist ordered it, I snatched it to read that weekend (the perks of being a teacher).

Anya, a recent Russian immigrant, doesn't fit in at her New England school. She wants to be a part of the popular crowd and blames that on her "Russian-ness." One afternoon, she falls into a hole where she finds the skeleton of Emily Reilly, a girl who died nearly 100 years before. Emily's ghost appears, and she tells her story to Anya.

When Anya returns home, a piece of Emily's skeleton came with her, so Emily's ghost continues to appear. At first, Anya is okay with this, as Emily helps her with her school work and with the dreamy boy she likes.

Then it gets flat out creepy. Emily's ghost starts to get a little aggressive, then violent, and the book spirals from there.

It's well done. And as someone who doesn't really like scary or suspenseful, this book had a lot going for it that kept me intrigued. The artwork is gorgeous and I think Brosgol really captured that teen angst and self-image dilemma in a realistic way.

A great, short read that is well worth it! 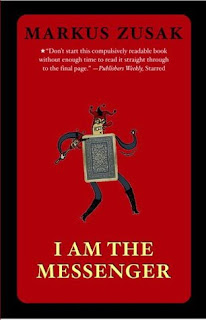 I've read I am the Messenger by Markus Zusak a few times before, and each time, I've loved it more and more.

We (meaning the Media Specialist and myself) included this in our book battle activity that we did back in the spring. It had been awhile since reading it, so I decided to pick it up and read it again to refresh my memory.

First, I forgot the amount of language in the book, so be warned going in. But other than that, I love the message of this book. Ed Kennedy, a teenager living in Australia, is lonely, going nowhere, and lost without his father. Then he witnesses a botched bank robbery and his world changes. He receives playing cards in the mail and each one has addresses. Not knowing what else to do, he visits the addresses and learns that he has to complete tasks for the people who live at that address.

Over the course of the novel, Ed grows. He changes. He realizes what's most important to him and comes to term with the things in his life that he has the ability to change.

The good thing is that most of the kids who read this as a part of the book battle loved it. It's not as popular as The Book Thief, but I love it as well. 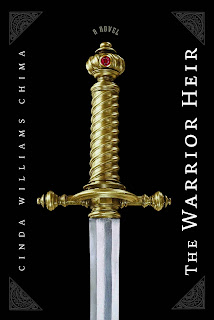 The Warrior Heir by Cinda Williams Chima is a book that has been sitting on my shelves for years. I picked it up, as well as two sequels, in the Borders sales that took place when the stores were closing. I've eyed it a few times, but never jumped on reading it.

So, last school year a student suggested it to me and I finally gave it a try. And while I enjoyed it, it wasn't my favorite (I will read the sequels at some point and make a final decision).

In short, the book follows Jack, a young boy who has taken a certain medication all his life. He is told to stop taking it and voila! Magical powers and strength come surging to him! Okay, not really. But he does go through some training.

There's also a bit about an old war that seeks Warriors, like Jack, to fight on both sides. Warriors are now rare, so Jack is being scouted and hunted by both sides.

My biggest complaints about the novel surrounded some of the explanations and magical rules. There were bits and pieces not explained well enough for my liking and the final grand battle? I don't know. It lacked something. Perhaps I am took picky with my love for adult fantasy to really be drawn to this one, but it was a fast read and something I flew through. And I do want to read the sequels, so that says a great deal, if you ask me. ;)

This particular post has been sitting my drafts for quite some time, so I thought it was time to bring it out, edit, and post it before it disappears into drafts forever. :) I hope you enjoyed!
Posted by Allie at 8:30 AM