Salt to the Sea by Ruta Sepetys. 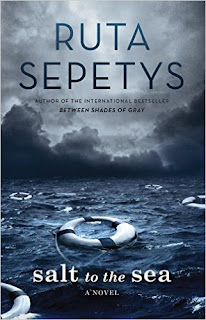 “War is catastrophe. It breaks families in irretrievable pieces. But those who are gone are not necessarily lost.”

I have been anticipating Sepetys' newest book since I finished Out of the Easy a couple of years ago. I find Sepetys to be a phenomenal historical fiction writer, as she manages to find topics that are known, but unknown. First, in Between Shades of Gray, she focused on the Soviet work camps and relocations that took place during and after World War II, then in Out of the Easy, on life in a brothel in New Orleans around the 1950s, and here, in Salt to the Sea, on the massive Operation Hannibal, an ill-fated attempt by Germany to evacuate citizens from the eastern front as the Soviet Red Army closed in on Berlin.

I love that Sepetys chooses time periods that we're familiar with, but focuses on topics that we might now know about. Truthfully, I knew little about Operation Hannibal before reading this title. I know I learned a little about it in a college history course, but as it is absent from most common history books, it's not something I would have come across recently. Basically, Operation Hannibal occurred as the Red Army began pushing the eastern front back toward Germany in early 1945. The German government, in fear of what Stalin's army was doing to its citizens, ordered a late evacuation of anyone with German descent. Some citizens escaped back into Germany on foot or by train, but there was also a massive operation to use remaining ships and transport German citizens that way (much faster, but also more dangerous).

The book does involve this process, but it is so much deeper than a simple book about a failed sea evacuation. Instead, Sepetys weaves together a gruesome depiction of what war does to everyday people. The novel switches perspective every chapter between 4 young adults as they all converge on the ship, the Wilhelm Gustloff, in an attempt to evacuate. Each of the 4 come from a different country and a different background, but all see the ship and evacuation as a beacon of hope-for different reasons. On their journey, we learn what has happened to them over the course of the war-who they once were, who they lost, and what their hopes might be.

And as the ship is hit by enemy torpedoes, we see what happens to those hopes and dreams...

What struck me most about the novel is that yet again, Sepetys manages to capture the realities and horrors of war. And in particular, on the horrors of the Red Army. I feel as though little is taught here in the States about what exactly was going on in the Soviet Union under Stalin, and what the state of eastern Europe was like during the last few years of the war. Stalin committed the same atrocities as Hitler, and did things that are often unmentioned in our history books. For example, I know book talks in length about the horrors of the Holocaust, etc, but only a brief mention is given to Stalin's own work camps. We know the names of Auschwitz, etc, but can you easily name a Soviet camp? I know I probably can't without looking it up for reference.

I love that Sepetys does this-that she captures historical timeframes in a new light and makes you question what you know. I mean, after all, Stalin was our ally in World War II....is that why little is taught about what his army did? I don't know. But it makes me curious and wanting to know more.

In any case, this is a fabulous book that discusses a naval tragedy talked about seldom. It's beautifully written, and the characters are well-developed throughout. If you're looking for a great piece of historical fiction, I highly recommend this one.

“What had human beings become? Did war make us evil or just activate an evil already lurking within us?”
Posted by Allie at 8:00 AM

Email ThisBlogThis!Share to TwitterShare to FacebookShare to Pinterest
Labels: Historical Fiction, Ruta Sepetys, Salt to the Sea, WWII, YA