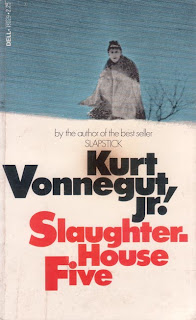 In my last post, I talked about Vonnegut's style and his way of writing a distinct anti-war book.

However, his book is often classified as slightly science-fiction, since there is a lot of conversation about time and place.

Now, stick with me, but in numerous portions of the book, Billy Pilgrim (the main character) travels to another world where he is on display as a representative from Earth. This serves a great purpose for helping to explain Vonnegut's point.

The novel does not flow in a linear fashion like readers are used to. We are used to things going in order, as they happen, with perhaps a minor flashback or two. That is not the case in Slaughterhouse-Five. At times it can be really difficult to see when and where Billy is, since he flows in and out of his own life and memories.

It is really this concept of time that makes the novel more powerful. Time and its movement is also the driving force behind the TV show LOST. I read this novel when I did in part to coincide with the LOST Books Challenge, so I have to explain both because they are very similar. In LOST, the characters have flashbacks and flashforwards, and sometimes even flashsideways. For many people who have tried to watch the show, this has become confusing. Moving in and out of time with characters is disorienting since you don't see them live their life in order. It is only after seeing a flashback that we understand who and what they are. Then the story falls into place.

Vonnegut's book is the same way. Billy changes age and location throughout the novel. And while the book is written about the Dresden bombings, the bombing doesn't take place until nearly the end. And there is a reason for that. By manipulating time and the linear structure of the book, Vonnegut helps explain who Billy was before the bombings, and the man he became after. Essentially, all events in a person's life shape them into who they are.

Vonnegut hints at this using the aliens I mentioned before. They try to explain to Billy their own concept of time. Here are some of their thoughts:

"Earthlings are the great explainers, explaining why this event is structured as it is, telling how other events may be achieved or avoided. I am a Tralfamadorian, seeing all time as you might see a stretch of the Rocky Mountains. All time is time. It does not change. It does not lend itself to warnings or explanations. It simply is. Take it moment by moment, and you will find that we are all, as I've said before, bugs in amber," (85-86).

"If what Billy Pilgrim learned from the Tralfamadorians is true, that we will all live forever, no matter how dead we may sometimes seem to be, I am not overjoyed. Still-if I am going to spend eternity visiting this moment and that, I'm grateful that so many of those moments are nice," (211).

To them, time is nothing. They can see each memory and moment at once and that influences their life. There is no separation between who they once were and who they are now because they are always all of that in one. That is an interesting concept of time, and one that LOST uses fairly well.

The TV show's characters move in and out of time just like Billy Pilgrim and while the view thinks, "Wow, that is different from how I saw them" it is not different than how the character saw him or herself. They have always been that way and always will be. Their memories and pasts have turned them into who they are, just as their futures will continue them down that path.

You can think of it in your own life. We all have moments that have made us who we are, but the moments never really leave us. They have transformed us and we can recall it in an instant by simply remembering it.

It is heavy to think about-time. But Vonnegut does it well and it serves his story. When Billy finally gets to Dresden and lives through the bombing, it all makes sense. The bombing is a part of him that he will never forget. It changed him and made him into who he is. It forever altered his life and will always remain with him.
Posted by Allie at 10:25 AM