"The Lady's Maid's Bell" and "The Eyes" by Edith Wharton. 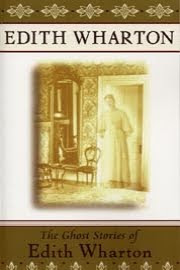 I picked up a copy of this title, The Ghost Stories of Edith Wharton, at a Borders closing sale. It was one of the few titles by Wharton I didn't own (I kind of LOVE Edith), and I figured that it needed to become a part of my collection.

I pulled it out a week or two ago when I was home alone and bored. I figured one or two ghost stories a night couldn't hurt me, right? Well, I read the first two stories (the ones I will talk about), had a nightmare and hellish awakening, and haven't really picked up the book since. Perhaps writing about the two stories is the way to go!

The first story in the collection, "The Lady's Maid's Bell," is more creepy than scary. Our protaganist has recently been ill, but is looking for employment. She is referred to the home of the Brymptons, where Mrs. Brympton is also a bit of an invalid. She is quiet, lonely, and ill. Their home is isolated and chilly. It seems to be a perfect fit for our protagonist, as she is still healing as well.

But of course, things are not as they seem. Upon arriving, our lady's maid sees a shadowy figure lurking in the doorway of an abandoned room. The house is mysterious, as are its residents. Mrs. Brympton is good friends with one of the only neighbors, a Mr. Ranford. He happens to come a visiting whenever Mr. Brympton is gone. That would be quite often. Since our lady's maid only knows pieces of information, we only see their interactions based on her thoughts and interpretations. It certainly does add to the mystery, but we never get real answers...

Anyway, as time unfolds, things begin to happen at night. Footsteps are heard in the hall, the bell above her bed begins to ring, but Mrs. Brympton denies ever ringing it...there are more shadows and faces emerging, and as the people spend more and more time in the house as the weather worsens, the more they feel confined... 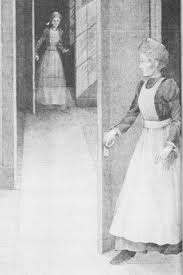 It is certainly a creepy story. By the end, I was more creeped out than scared. I'll also admit I was a little confused by the end. I wanted more from the ending-something substantial in terms of answers...and I didn't get them. But, it was a fun read anyway.

The second story, and the one that gave me a nightmare, was "The Eyes." In this story, our narrator is at a party. As a group, they have been entertained by a series of spooky stories, before the eldest member decides to tell hsi tale of "the eyes."

He sets the mood and begins to explain that he was a bit of prankster at one time. It came back to get him...

For nights, months, and even years, he would wake up in the middle of the night to large eyes staring at him as he slept. The first night he jumped out of bed to investigate. After the lights were on, he searched his room for the source of the eyes, but found nothing. As soon as it was dark again, the eyes came back, watching him as he slept.

This continued off and on in spurts. The eyes followed him to Europe and came back after an unfortunate incident. They pop up when something happens, when he provokes them. He never knows just when they might appear in the middle of the night, staring at him unrelentingly.

It is freaky. I was reading this and getting super nervous...considering I was reading this in bed when Matt wasn't home. In the volume I have, there are pictures for each story (the one above comes from the first story). The image of this story was a man in bed with huge, scary looking eyes staring at him. I wasn't expecting that, so I jumped a bit when I saw it (I can't find a picture online or I would share).

By the time I finished, I set the book aside. Because while both stories were more creepy than scary, this second story had completely freaked me out. I don't like things watching me when I sleep....

So that night...I was fast asleep when I started dreaming about eyes watching me. I was tossing and turning for a bit before I jumped awake. I kid you not, at the foot of our bed I could see two eyes staring at me. Light comes in from our bedroom window, and those eyes were glowing. I jumped and screeched a bit before realizing it was just one of the cats. After my heartbeat steadied a bit, I pushed the cat off the bed and fell asleep. Matt slept through the whole thing. Jerk.

Anyway, I did enjoy both stories. I am very familiar with Wharton's writing style, so it made them more enjoyable than had they just been scary stories by another author. I can still see her love of misery in these. :) And even though I freaked out a bit, I am still excited to read the rest of them!


*I also have to say that reading the reviews for this on Goodreads really makes me laugh. Almost every review says that these are pretty tame and unscary. I suppose my freak-out is unusual and would make Wharton laugh! Considering Edith didn't like ghost stories either, I find that hilarious. This is why we are kindred souls, me and Edith. :)*
Posted by Allie at 11:16 AM