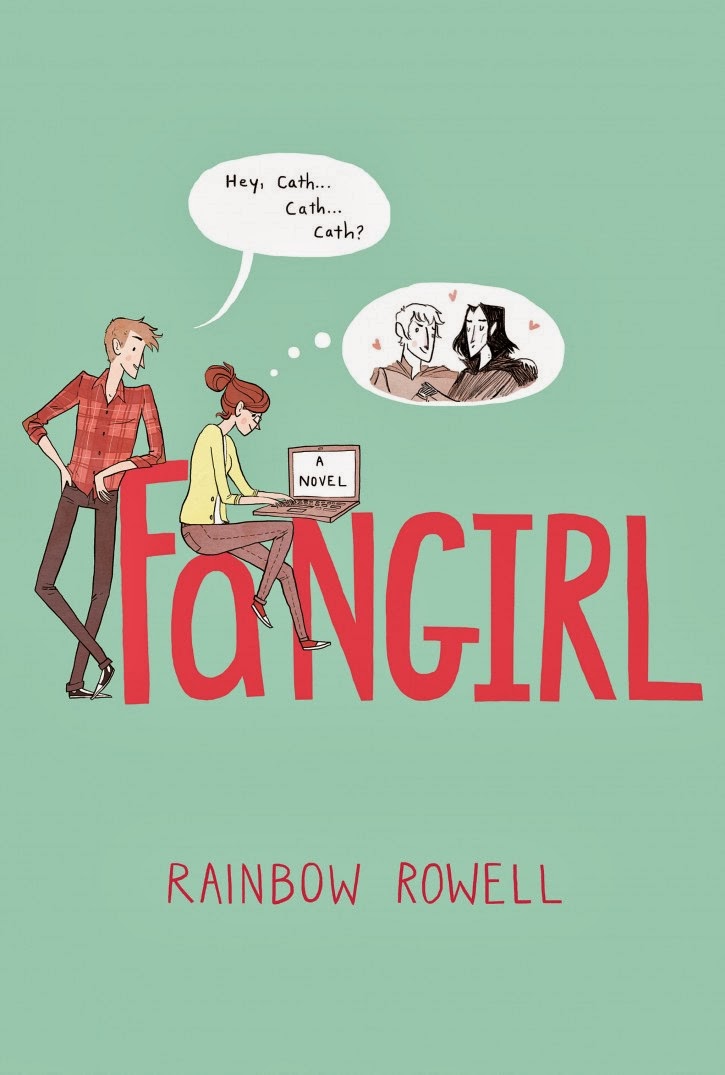 “Underneath this veneer of slightly crazy and mildly socially retarded, I'm a complete disaster.”

I fell in love with Eleanor and Park when I read it last summer, so I've been eager to read more by Rowell (I just realized I never reviewed E and P...I might need to do so!).

Fangirl is the perfect book for anyone who has been obsessed with a certain franchise of books (Harry Potter definitely came to mind when I read this). Cather is obsessed with a series about a character named Simon Snow, and with her sister, Wren, has built a huge fanbase online writing fanfiction. Now that she is older and in college, awaiting the release of the eighth and final book, the pressure is on to finish her own novel for her own adoring fans.

The only problem is that she's starting her freshman year of college, dealing with a difficult roommate, her roommate's odd boyfriend, trying to understand why her sister is pulling away, avoiding reconnecting her her estranged mother, and worrying about her father who now all alone at home and definitely empty-nesting.

In one word, I would classify this book as adorable. Because while there are certainly enough negative things going on in Cather's life, the story is heart-warming. Cather undergoes a big transformation from the beginning of the novel to the end. She enters college unsure and scared-afraid to even venture into the cafeteria for fear of being alone or not knowing what to do. Eventually, she finds her place among all the craziness around her and we see real growth in who she is and what she wants.

“In new situations, all the trickiest rules are the ones nobody bothers to explain to you. (And the ones you can't Google.)”

Some of what I enjoyed most about this book were Cather's little quirks-many of which I have myself. I've also felt a bit of fear about going into a new situation and not knowing what to do. Her fear of being alone and uncertain in the cafeteria is a fear I've felt many times-going to conferences, etc. She is also a bit of a recluse, choosing to stay in and write or read than go to a party. She's also a person who cares for people who ask her for help. First, the boy from her fiction writing class. Then, her roommate's odd duck of a boyfriend.

I was also fascinated by Cather's writing and her devotion to her craft-and props to Rowell for using fanfiction in such a positive light! While I've never written fanfiction (I know I couldn't do justice to someone else's characters), my younger sister did for quite some time. There are so many big communities out there, and for many, it's a great way to extend the life of a well-loved series. In Cather's case, it was also a way for her to play with her words, and push her to trying something else.

However, the thing that I most loved about this was Cather's love interest. Can I say a huge thank you to Rowell for showing a male love interest who is actually a really good guy? Who doesn't do creepy/stalkerish things that are "romantic?" THANK YOU.

In all, this was a sweet book that left me with lots of warm fuzzies and a desire to read more by Rowell in the future.

"Happily ever after, or even just together ever after, is not cheesy,” Wren said. “It’s the noblest, like, the most courageous thing two people can shoot for.”
Posted by Allie at 8:00 AM