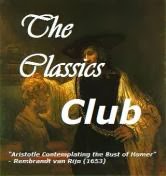 Every month, the folks over at The Classics Club post a question for participants to answer. I'm a huge fan of this month's topic:

“Dead white guys” are all too often the focus when it comes to discussions of the Western Canon. We’d love to see members highlight classic works or authors that are overlooked in the canon that deserve recognition. Pick one/or more and tell us how their work resonates for our century and/or for you. As always, you determine what is a “classic” in your point of view, including works from 2000+, and works from anywhere in the world. // Or, if you have trouble thinking of an author/work to highlight, you could simply discuss the topic itself: What is “The Western Canon” — have you thought about who/what determines which works are recognized from human history?

This is a complicated question and probably deserves a much more articulate response than what I have to offer, but I'm going to give it a shot anyway-speaking as an English and History teacher.

One of the things I always stress in my History classes is that history is always presented with a bias. There is no way to talk about history without presenting information that may be considered one-sided. Because historians evaluate themes and facts and experiences from things like letters, diaries, etc, there is an inherent bias that you can't ignore. Obviously, an American Revolutionary soldier is going to have one interpretation of the battle and a British General will have another. So, historians evaluate the evidence and come up with a middle ground that explains the battle as whole, pulling in evidence from all members involved.

For textbooks, which are generally considered to be factual and to the point, writers take the general consensus of what happened at an event and compromise it into "factual" information about what happened. This results in the loss of multiple perspectives and a biased read. One of the most common examples of this in American history textbooks has to do with Native Americans. They appear only briefly at the beginning of a textbook, and will only pop up when necessary later on. Much of the "history" concerning Native Americans in U.S. textbooks focuses on the negative-there is little focus on achievements, culture, and history. There are arguments as to why, but it's worth noting that they are glossed over-this is something I always hammer home to my students-to think about what isn't included.

So, how does this connect to literature and this month's question? Much like history is dominated by dead white guys, so is literature. Since dead white guys have formed powerful and influential nations across the globe, they have also created a dominant and aggressive culture. That culture includes those men like Shakespeare, Dickens, etc. It makes sense then, that those authors would dominate the canon-they're part of the ruling class and the dominant culture. And for the most part, they're great works of literature.

But that also leaves out literature from many places across the globe. I'm the first person to admit that I am very westernized. The majority of the literature I read comes from Western culture. I would be hard-pressed to identify classics from other regions of the world. Perhaps that shows my ignorance toward that kind of literature, but it also reflects my education.

For my English degree, I was only required to take one multicultural literature course-I took Chicano/Chicana lit because of my interest in Mexico's history (I have a specialization in that).

So, it doesn't surprise me that literature and history, especially here in the Western world, it dominated by Western culture and Western authors. And while I try to be as diverse as possible in my reading, it's hard to combat a canon that is established and recognized not only by scholars and lists of great literature, but also by the masses. I hope, that in the future, I will continue to branch out and focus on reading literature from all over the world, as opposed to what I am already comfortable with.

For what it's worth, I have read some great pieces that are not immediately connected to the canon and that I think are well worth your time to read. The first, Ceremony by Leslie Marmon Silko, is a lovely Native American piece that speaks to that disconnect between their culture and mainstream America. I highly recommend it. I would also throw out Things Fall Apart by Chinua Achebe as another great read that's not from mainstream America. I actually have a lot more of Achebe's work on my shelf that I've been meaning to read. The third I'll recommend is by Olive Schriener-The Story of an African Farm. Schriener was a South African writer, but comes at it with a different perspective-it's an interesting book and one that I don't see all that often.

As you can see, there are definitely holes in my education, but as for those dead white guys, their work is famous for a reason. I will definitely continue reading it and explore my options for books by others as well.

What do you think of this topic? Any books you can recommend me?