A Moveable Feast by Ernest Hemingway. 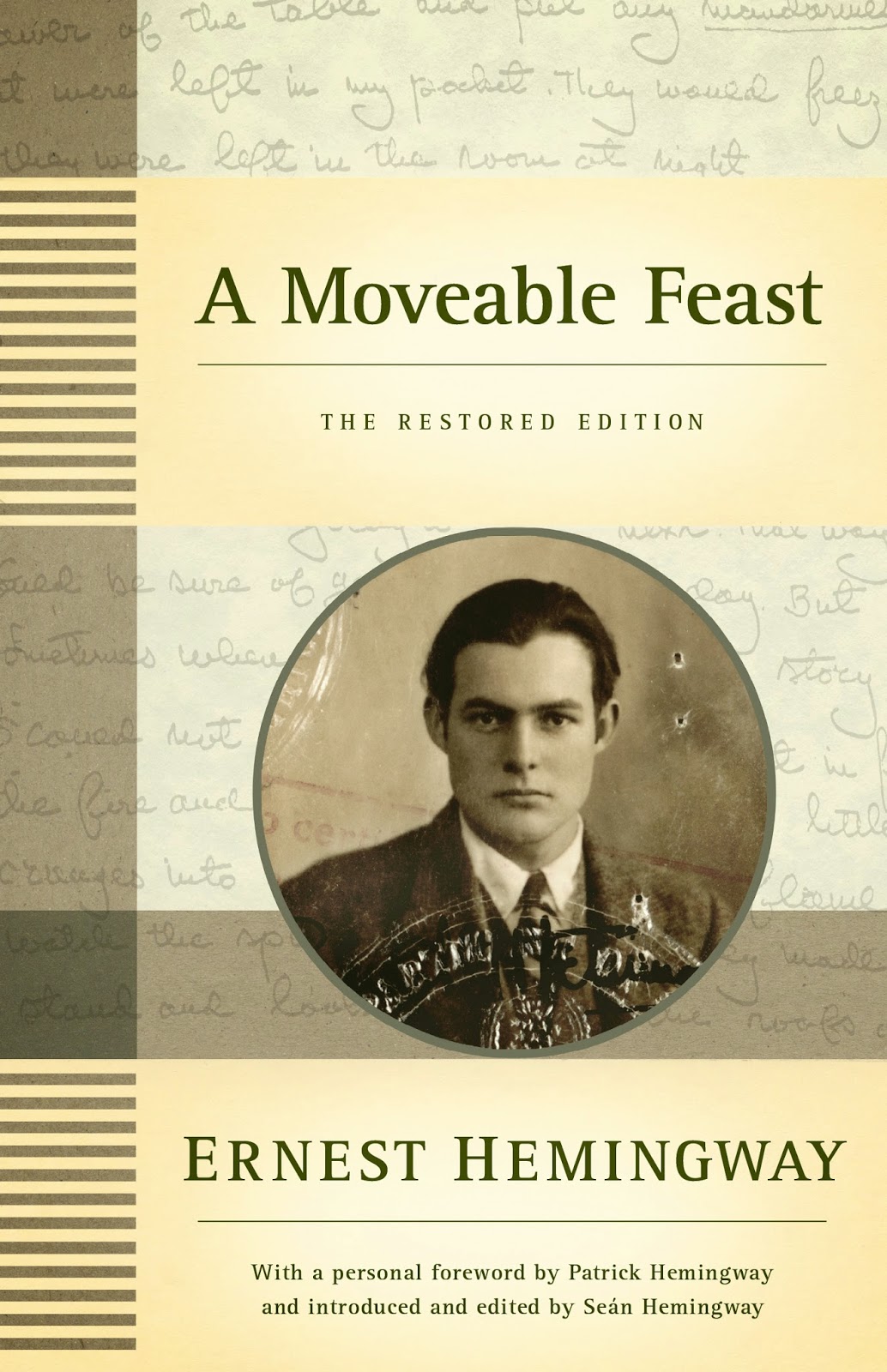 “You expected to be sad in the fall. Part of you died each year when the leaves fell from the trees and their branches were bare against the wind and the cold, wintery light. But you knew there would always be the spring, as you knew the river would flow again after it was frozen. When the cold rains kept on and killed the spring, it was as though a young person died for no reason.”

I'll be honest and say I don't know a great deal about Hemingway, and I probably should. I definitely know the basics and have read a couple of novels (The Sun Also Rises and A Farewell to Arms) as well as a few short stories (I actually use "A Soldier's Home" in my American lit class). He's one of those figures in American literature I tell myself to read more of, but never seem to find the time. Then I had my experience with The Paris Wife over my break (post here) and found myself quite fascinated with Hemingway and his work.

This title had been sitting my shelf for quite some time, so I knew it would become a part of my TBR Challenge for this year, as well as a jumping off point for some further exploration of his work. And, so enthused by my recent reading of The Paris Wife, this become book #2 that I finished in 2014.

From the very first chapter, I was taken in by Hemingway's writing and transported back to his years spent in Paris. Through his recollections, I also got to meet some great literary figures-Stein, Pound, Ford, and Fitzgerald (all of which I should also explore at some later date). His gossipy chapters about their lives and his writing and his experiences on the streets were vivid and simple and complex all wrapped up in succinct observations. It was beautiful.

His observations of his fellow writers was both entertaining and heart-breaking. In particular, his chapters on Fitzgerald and his decline broke my heart, perhaps because I just finished teaching The Great Gatsby to my sophomores. Through Hemingway's eyes, I had to see Fitzgerald as weak and unsure...and a captive to his alcohol. But I also got to see him through a friend's eye-not just as someone I've admired from years away and based solely on his writing. I found that to be a bit of a profound experience. I mean, I love writers and their products and while I love to research their lives and experiences, I don't always get to see them in such a raw way. Hemingway's observations made that come to life.

However, my favorite parts where Hemingway's musings on his craft. His words about making stories appear, and living through them, was also raw and emotional. He took his writing seriously and set rules for drinking around his writing (interesting, right?). He also mentioned the devastation of losing his early work when his first wife, Hadley, was bringing it to him (it was stolen on her train). The idea of losing my own work, as unimportant as it is, breaks my heart, so I can imagine that he truly did feel lost when it was gone. Like myself currently, Hemingway had a real connection to his words. It was beautiful to see that passion and drive come through even as his reflection.

In all, I found this memoir to be inspiring. To know that he often felt discouraged and hopeless, that he and Hadley lived in tiny apartments cramped with books and paper...it was a bit soothing to tell the truth. It was all they really needed to be happy.

I'm curious to read more about hie life and more of his work. And by reading something that came out after his death. I think I can read his work with a new perspective-see his mind working away at crafting enough work each day. I'm so tempted to craft another author study for him, but I know I should finish those I've already undertaken.

And if you haven't read this and are looking for a way to introduce yourself to Hemingway, why not start here. It's a great recollection of his days in Paris before truly "making it" as a writer.

“There is never any ending to Paris and the memory of each person who has lived in it differs from that of any other. We always returned to it no matter who we were or how it was changed or with what difficulties, or ease, it could be reached. Paris was always worth it and you received return for whatever you brought to it. But this is how Paris was in the early days when we were very poor and very happy.”