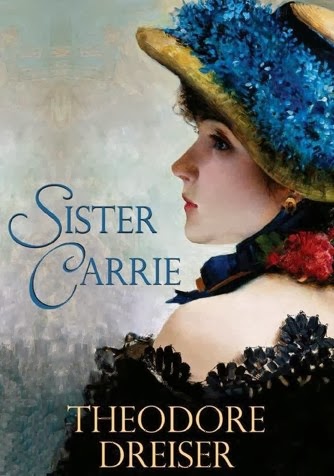 “When a girl leaves her home at eighteen, she does one of two things. Either she falls into saving hands and becomes better, or she rapidly assumes the cosmopolitan standard of virtue and becomes worse."

After finishing 2 books off my TBR Challenge list relatively early in the year, I wasn't sure if I was ready to tackle another just yet. So, I stood and stared at my shelves for a bit in hopes that something would jump out at me. And while Theodore Dreiser's Sister Carrie didn't jump at me, I felt compelled to pick it up and flip through it. It was after looking at it that I decided there would be no better book for me in that moment.

And how right I was.

In short, Sister Carrie seems like a relatively simple story.  A young girl, Carrie Meeber, finds her way to Chicago to live with her sister and her husband in hopes of finding some work. On her journey into the city, she meets the handsome Charles Drouet, who will change her life and fortune in the future. Once in Chicago, she finds herself in a small apartment with her poor relatives. She finds a job working int a shoe factory, but after falling ill and losing her position, she determines to leave for home...and then Drouet enters, offers to buy her new clothes, find her rooms, and her life changes. Because while Drouet does many things for her, and has pulled her from poverty, it isn't enough for Carrie. She continually wants more from life-more wealth, more possessions, more happiness. So when other opportunities present themselves, she goes along with it. In the end, Carrie is left with the fortune and fame she always wanted, but her one real wish-to be happy and content with herself-isn't there.

This is the kind of novel that I always seem to gravitate towards. A woman out in search of something greater, but she never quite manages the happiness that she craves (The House of Mirth and The Portrait of a Lady share many of these qualities). Carrie, however, is a bit different than the other women. Whereas many "fallen" women force themselves into their circumstances, Carrie just kind of...goes with it. She protests going along with Drouet when he wants to buy her clothes and rent her rooms (she insists on returning home for quite some time), but after trying on a beautiful coat, she consents to hear him out. She does as he bids and allows him to dress her up and give her money to fulfill her whims. Eventually, that isn't enough and an even wealthier man, Hurstwood, enters the picture. Unlike Drouet, Hurstwood is married and as his own fascination with Carrie elevates, he loses all reason to be with her.

Again, Carrie doesn't necessarily force her own hand. She is hesitant to give into Hurstwood, but once she does, she goes along with it. At no point does Carrie actively make decisions to change her future. And after Hurstwood makes poor decisions and must flee, Carrie is "tricked" into fleeing to New York with him to avoid the problems. 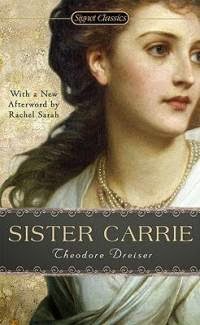 It is only once the two of them are in New York that the novel really begins. It is here that the reader sees Hurstwood's fall from great heights. In Chicago, he was wealthy, well-known and respected, but after throwing that away to chase after Carrie, he's no one. He struggles to find work and loses it. And soon he spirals down into nothing but a man who sits at home readings the papers and pestering Carrie. It is also in New York that Carrie finally makes the one decision to change her fate. After Hurstwood loses everything and begins his downward spiral, she must search for work for herself, landing a small role on Broadway. It is only when her career begins to rise that she makes the decision to abandon Hurstwood in his poverty and seek out wealth for herself.

In the end, she has what she so desperately went to Chicago for-wealth, pretty clothes, fame-but no happiness. In the end, she's unhappier than she ever was before, having used and set aside the men who helped her get there.

That ended for Carrie was certainly sad, but nothing in comparison to what happens to the men in her life. After leaving Drouet in Chicago for Hurstwood, nothing changes in him. In fact, he is very much the same person he used to be, only more in love with Carrie when they reunite in New York because she is everything he cannot have.

And Hurstwood? For me, he was truly the "fallen" character in this novel. His whole life spiraled downward after meeting Carrie and falling for her beauty. He lost his wealth and his connections and near the end, is homeless and begging on the streets of New York. There is one scene where he corners Carrie outside the theater to beg for money to eat because she "owed it to him." There is also the tragic scene where he finds a room in a hotel very near the end of the novel...yes, he falls from great heights into something truly tragic. He, unlike Carrie, truly loses everything.

Yes, this was a novel that suited me perfectly and had me anxious for more time to read. It reminded me greatly of some of my other favorites and is a book I will certainly reread again at some point in the future.

“How true it is that words are but the vague shadows of the volumes we mean. Little audible links, they are, chaining together great inaudible feelings and purposes.”
Posted by Allie at 8:00 AM