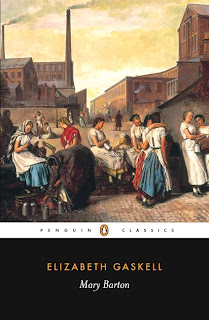 I am fairly familiar with Elizabeth Gaskell. One of the first readalongs I hosted here was on Cranford (posts are linked below). In college, I had a friend introduce me to the wonders of the BBC adaptation of North and South, which I promptly purchased to watch over and over again. I eventually read the novel (which I LOVE), so I would say that I am definitely a fan of her work.

It was a recent re-watch of the BBC miniseries that inspired me to pick up another of her novels. I was feeling all needy for some Gaskell-inspired England, so this was the only choice left to me off my list (When I made my list, I originally excluded Gaskell, but eventually put in three of her titles. Since I had already read North and South, I decided to add in three titles I was unfamiliar with: Cranford, Mary Barton, and Wives and Daughters, which may be a readalong in September). Whew. Anyway, I am excited to read some of earlier work. This one seems promising and I am excited to dive in.

Have you read anything by Gaskell? I would love to read her biography on Charlotte Bronte, but I need to find a copy first. :)

If interested, here are the links to my posts on Cranford (Book 48):