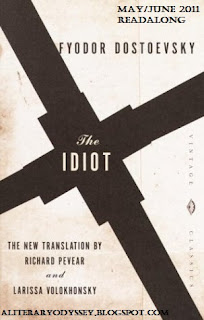 Welcome to the combined post of parts 1 and 2 of the readalong for Fyodor Dostoevsky's The Idiot hosted here at A Literary Odyssey!

I had every intention of sticking to the schedule I had made to keep the posts separate, but life happens and I had to deal with it. Of course I'm not happy about not sticking to my schedule, but it happens.

"There is something at the bottom of every new human thought, every thought of genius, or even every earnest thought that springs up in any brain, which can never be communicated to others, even if one were to write volumes about it and were explaining one's idea for thirty-five years; there's something left which cannot be induced to emerge from your brain, and remains with you forever; and with it you will die, without communicating to anyone perhaps the most important of your ideas."

We are now about halfway through The Idiot. Rather than recap every little thing that has happened so far, I thought it would be better to explain to you what I am loving about this novel so far.

I love the characters. Perhaps it is the Russian names, nicknames, and my inability to pronounce their names, but I love the characters in this novel. Prince Myshkin is without a doubt my favorite. I love his naivety and innocence. I love the way he interacts with those around him in a seemingly simple way. He made me smile when he was telling stories. He isn't afraid of embarrassing himself or those around him. He appears to be perfectly humble and giving.

I find it refreshing to read about him. How often are we granted a character who is so inherently good? He appears to only want the best for those around him and seems willing to do anything to make that happen. I wish there were more people like that in the world-who sincerely care for those around them....

The choice in naming the book The Idiot is one I have been mulling over. It is definitely a play on how the others in the book perceive Myshkin. He really isn't an "idiot" in his mentality, he just isn't as world-wise as everyone else. I wonder what Dostoevsky means when he calls Myshkin an idiot...did he really think he was? It just adds more depth to Myshkin's character.

I have found, that in all of the Russian novels I have read so far, that this depth in character seems to be a staple (other Russian titles I have so far include Fathers and Sons, Crime and Punishment, The Brothers Karamazov and War and Peace). There is something about the breadth of these novels that allows the reader to become insanely intimate with the characters. In the other two novels by Dostoevsky, I find that he really strove to accomplish that. I find this one to be no different.

In addition to the depth in characters, I also love the complicated plots with the characters interacting all over the place. It give the readers a great place to focus on and become accustomed to. I am finding this to be a staple in Russian literature as well. If you can't tell, I definitely love the novel so far and I am looking forward to how things work out for dear Myshkin and the others within it (I'm keeping my fingers crossed for a happy ending).

How are you all faring? Hopefully it is going well? Let me know in the comments! And don't forget to give me links to both your posts so I can link them here!