December 2015 Reading Plans and November in a Nutshell.

I found that I needed to take a step back from blogging early in the month. With my grandma passing away in late October and missing almost an entire week of work, I spent weeks trying to play catch up. I also got bogged down with 3 debate tournments in 2 weeks (I'm one of the coaches this year), as well as regular grading and other commitments. Needless to say, reading and blogging took a backseat to everything else going on. To put it in perspective, I read a grand total of 2 books this month. One was Macbeth, which I read with my Shakespeare class. And the other was a romance novel I read on Wednesday as I was home sick. So....yeah. After the success of #15in31 in October, everything came to a crashing halt.

So, for December, I have grand reading plans. I have that HP challenge going on, and since December is usually the time of year that I comfort read, I think that'll fit in wonderfully. I'm also 6 books away from my book challenge number on Goodreads (of 75 books for the year), so that's some good motivation.

But I miss the excitement of #15in31, so I decided to host my own this month. I'm not sure if anyone wants to join, but I found it to be a good push in October, and I want to get more reading done. 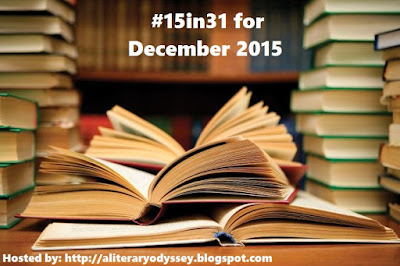 Feel free to let me know if you want to join in!

I'm not pulling a big pile of books for this month, but I do have some things I know I want to finish:


Anyway, I really just want to relax and read, and I need to find the time to do so. I miss that part of my life!
Posted by Allie at 8:10 PM 6 comments

The Impossible Knife of Memory by Laurie Halse Anderson. 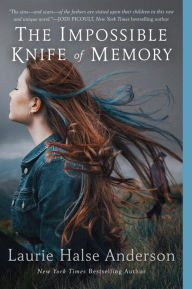 “You're the one who doesn't understand, I've been standing on the edge with you for years.”

I went on an Anderson binge at the very beginning of this year. In about a month, I read Speak, Catalyst, Twisted, Chains, and Fever 1793. Basically, I read almost every Anderson book in our media center (with the exception of Forge, which has been checked out by a student every time I try to grab it). I'm pretty sure that I've read a majority of Anderson's teen works (I mean, I read Wintergirls last year...so yep). And I consider myself to be a huge fan of her writing. I think Speak is a fabulous novel that all high schools students should read, and when I taught it last school year to my struggling readers class, they loved it (side note about that class-I miss teaching it. But if it were up to me, I would teach everything). We also included Catalyst and Wintergirls as choices in our big book battle project last school year (which we are doing again this school year with some new titles).

So, I have no idea why I jumped over The Impossible Knife of Memory. Perhaps I can blame it on the fact that at the time, I wasn't buying any books and was reading a great deal of young adult fiction readily available in our media center, and we don't have a copy of this one (no worries, I requested it). In any case, it jumped out at me as a suggestion on Amazon when I was ordering for a book swap, so I purchased it on a whim. It's Anderson. I knew it would be good.

And I was definitely right. However, I don't think this is Anderson's strongest work, but I still loved it.

Hayley Kincain and her father have been on the road for the last few years. This has allowed them to constantly travel, but when Hayley's father decides to return to his mother's house and enroll Hayley in a regular school, things get bad. Hayley's dad, Andy, is a veteran, and since returning from Iraq, he has yet to deal with what he saw and did while on tour. And while Hayley does all she can for her father, he has to confront his demons.

What I really liked about this book was the focus on the relationship between father and daughter, given Andy's bad mental state. Personally, I have no connection to a veteran with PTSD. I know some about the disorder and what it does, but I've never been impacted by it. Seeing Andy struggle through Hayley's eyes gave me a lot of perspective into the disorder and what can trigger it. As someone who teaches about PTSD in both of my subject areas, I found to this to be very helpful, even if coming from a work of fiction.

I find, very often, that when I teach about PTSD in relation to Vietnam (it's a focus in our American lit curriculum), I have a hard time connecting that information to my students. Now, at least, I have more to share (and I am more inspired to seek out other works that discuss it in more detail).

Anyway, the relationship between Hayley and her father is complex, and while she does all she can, she can't fix his demons for him. I think that in and of itself is an important concept for teenagers. I can't tell you how many times I've seen kids try to battle each other's demons. Heck, I do it myself. So that lesson and message was one I found a lot of value in.

I also quite enjoyed the scene where Hayley's father comes to school as part of a Veteran's Day event and speaks to a few of the kids. We do a similar event (it's actually this week), so looking at the build-up and struggle of veterans to speak about their experiences...well, it was a fresh perspective on what it's like. It also gave me even more respect for the men and women coming into our building, and everything that they have sacrificed.

All that being said...there were parts I didn't like. I think the romance was cheesy and distracting from the core message of the book. I also found Hayley to be a bit contradictory in her words and manner, and wished, at many points, that she would just DO something.

I also, quite frankly, felt the ending and climactic scene were a bit of a let down...almost a cop out. I think I expect a little more from Anderson, and well, I just didn't get it at the end.

Overall, definitely a book I will be recommending to the right student, and a great addition to Anderson's canon.

“Killing people is easier than it should be.” Dad put on his beret. “Staying alive is harder.”

Email ThisBlogThis!Share to TwitterShare to FacebookShare to Pinterest
Labels: #15in31, Favorite Passages, Finished, Laurie Halse Anderson, The Impossible Knife of Memory, YA 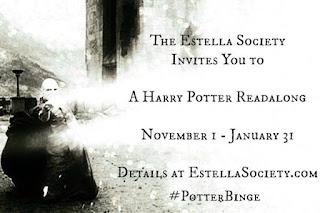 I'm so excited to say that I'll be joining the Harry Potter Readalong hosted at the Estella Society. I have reread the Harry Potter series multiple times since they first came out, with my most recent reread in 2013...so...totally time for a reread. :)

The readalong is very loose-read as much or as little Potter as you want. Post about it. And enjoy.

For myself, I'm planning on rereading all 7 titles, as well as the 2 schoolbooks, The Tales of Beedle the Bard, and Harry, A History by Melissa Anelli (which has been sitting on my shelf for a long time). I'm pretty sure I read the 3 small books the last time I #potterbinged, but I'm not positive. In any case, they're great little reads in between the massive books at the end of the series. I'm sure I'll also watch a few of the movies (just my favorites), but I doubt I'll have an HP movie marathon like I did once before (we made themed drinks. It was fabulous).

In any case, I hope you'll consider joining in as well! It's a great event, and who doesn't love Harry Potter?
Posted by Allie at 6:44 PM 2 comments 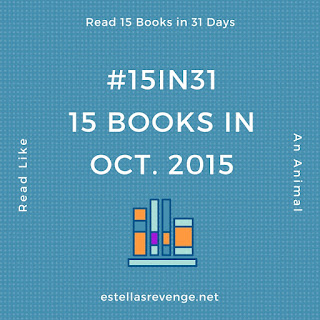 If I plan on doing a #15in31 in December, does anyone want to join? I always have more to time to read that month with 2 weeks off and lighter workloads (I'm usually in the middle of a novel in my American lit class, and I'll be reading another play in Shakespeare, so....less grading). Let me know if you're interested!
Posted by Allie at 7:30 AM 6 comments