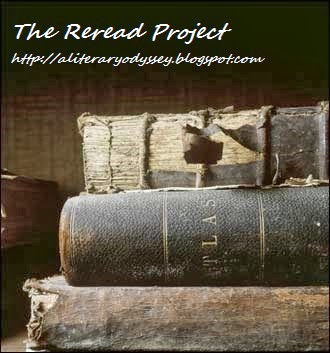 My Reread Project launched officially in January 2014. It was really inspired by o over at Behold the Stars. I know that she initially started her rereading project with many of the same goals in mind.

To often, as book bloggers, we focus on reading as many "new" things as possible. And I don't mean just books that are being published now, but books that are recommended to us by other bloggers, friends, the library, etc. And too often, we are distracted by all the new books and we ignore the books that have been there for us before!

I know I am not alone when I say that rereading used to be a huge part of my life prior to book blogging. And while some of that is because I lacked new books (I can't say that anymore-I buy books like crazy), it was because I LOVED revisiting books that I had read numerous times before. For me, rereading a book not only brings back that story, but also where I was each time I read it.

So, with that in mind, I'm setting a goal to reread as much as I can. I've made an initial list, but I might venture off of it, or add/remove as I go forward from here. As a secondary goal, I'm aiming to finish 15 rereads by the end of December 2014 (I have myself 15 titles to start).