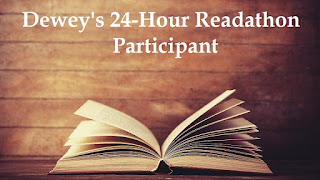 Edit 2: 7 PM (Hour 12):
Hey guys! I'm back! I actually finished my first book about a half hour ago, but I needed a snack and some internet browsing before returning to some readathoning.

Not much else has happened-the cats have been passed out on my lap for hours. I only bothered them for a snack and some more water. I'm ready to dive into the sequel to my first read-Throne of Jade-and will be absorbed in that until Matt gets home at 10.

Number of Pages Read: 356!
Books Finished: 1 (His Majesty's Dragon by Naomi Novik)
Cups of Tea: 2 I just made a new cup of English Breakfast...I also drank a 24oz bottle of water while reading this afternoon. I'm sufficiently hydrated.
Instagram posts: 2 (and about to make a 3rd!)
Snacks: I just grabbed some chocolate covered banana slices from the freezer. YUM
Cat Snuggles: LOTS
Husband Distractions: None! He won't be home for another 3 hours!

Edit 1: 3 PM (Hour 8):
Well, I have not been off to the greatest start, but that's about to change. ;) My start time this morning was supposed to be 8am, but I didn't even get out of bed until after 10. I've had a long and stressful week at work, so I needed the extra sleep. I did get up and read for an hour, and made some progress in my first book. Then, Matt got up, we ate breakfast, and then we decided we needed to go grocery shopping as we had nothing left to eat in the apartment (he had the last of our cereal and milk for breakfast, I had two sad looking frozen waffles). So, an hour of shopping later, we have a full fridge, freezer, and pantry. We also cleaned out our fridge, did a little cleaning, and he just left for work. So, I'm settling in to go comment on a few blogs before returning to my book. I have no real plans for this afternoon besides reading. I do need to do a little more cleaning, but I don't want to just yet. ;) Reading first! I probably won't check in again until I finish my book, so...it'll be at least a couple hours. I hope you're all enjoying yourselves and squeezing in some good reads!

Number of Pages Read: 113-SAD. But my choice in deciding to reread the Temeraire series was a good one. I'm very much enjoying the reread-I read the first 4 YEARS ago and never finished the series. And after finishing The Help earlier this week, this one just jumped out at me. :)
Books Finished: 0
Cups of Tea: 1 I had a nice cup of English Breakfast tea this morning with breakfast. Right now I'm finishing a Lime LaCroix
Instagram posts: 1
Snacks: No snacks-just meals. I had two multigrain frozen waffles for breakfast, and I made some butternut squash ravioli with butter and garlic for a quick lunch before Matt left for work.
Cat Snuggles: 2. Lily is sleeping by my feet and Sparty is curled up on my legs.
Husband Distractions: Many-he wanted to go grocery shopping, then clean, so....ugh. But he's gone for the next...7 hours, so I should be able to fit in some good reading time!

Tomorrow is one of my favorite days of the year-readathon day! And I have been looking forward to it for MONTHS. And while I normally pull a big stack and talk about how all my plans...I have none set for this time. My only goal is to relax and read a lot. I'm shooting for 18 hours (I can never make it the full 24), and 2 books read, but we'll see. :)

In any case, I will be updating this post throughout the readathon. Stop in from time to time and say hi, and let me know if you're reading-I'll stop by and cheer you on! Happy reading tomorrow!
Posted by Allie at 10:34 PM 8 comments

Since June (when school got out), I have been on a big series binge. While I've grabbed a few new ones, I'm also taking the time to revisit some that I haven't finished, or that I want to reread.

I love rereading books, and try to take advantage of doing so whenever I can. There is something very soothing about rereading a series and falling back in love with a story that you love. However, it's easy to make excuses not to do so. This summer, I decided that I just needed to read more, and if rereading was how I was going to jump-start that, then, I would do it. It started with a new to me series-The Throne of Glass series. I inhaled the first 4 books before telling myself I had to take a break. The 6th book just came out, so I am planning on getting around to the next 2. I also read a 4-book series that had been sitting on my shelves for a very long time-The Books of Pellinor. It was after finishing that series that I decided I needed to consciously work at reading, and rereading series on my shelves.

I'm sure I'm not alone in the fact that I will often start a series of books, read the first couple, and then set them aside (or have to wait for the next to come out). And sometimes, it is hard to make the time to go back. I'm also a fan of diving back into the series before reading new titles, especially if it has been awhile since I've read them. For example, I already reread the entire Harry Potter series before a new book came out-I did the same this past year before Cursed Child hit the shelves.

In any case, I thought it would be a good idea to start a list (I love lists) of the series I have sitting on my shelves that I would like to get to reading...or rereading. I should note that if a book has a sequel, I'm counting it as a series for the sake of this post. :)

Phew. I think that's it for now. I mean, I know there are more on my shelves, but I think I'm off to a good start, right?

Tell me about the series you love. Do you reread before a new title comes out? Or are you a standalone kind of a reader? Let me know below!
Posted by Allie at 2:03 PM 3 comments