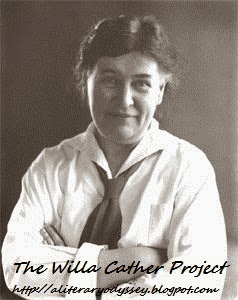 In January 2013, I introduced "The Willa Cather Project." Essentially, the goal of the project is to read the entire works of Willa Cather and blog about it. Prior to beginning the project, I had only read two of her novels, My Antonia and O Pioneers! Throughout the course of my project, I am hoping to not only read her novels, but her short stories, poetry, and the volumes of nonfiction she also published.

I chose Willa Cather for a couple of reasons. First, she is an author that I previously disliked (as a freshman in high school, so don't hold that against me. After reading two of her novels as an adult, I discovered that I really adored her writing and the sense of "America" and strength she brings. Second, I wanted to focus on a writer that didn't have a never-ending amount of work to read. Since she is the first writer that I am attempting to read the entire works of, I didn't want to be overwhelmed (like with Tolstoy or Twain, both who have a LOT of writing, but both are writers I would maybe tackle in the future). Third...girl power. I wanted to read a female writer. So there.

In any case, this is where I will be tracking my progress and updating links. For the most part, I will be attempting to read in order of publication, unless I cannot find something (and later do). The only exception to this is My Antonia, since I read a mere 2 days before announcing my project (I am reading O Pioneers! once more). I also reserve the right to skip of miss a work if I cannot find a copy anywhere.

I'm not positive that I have all the short stories listed, but I will add as I find/discover other stories. I'm really excited about this project!