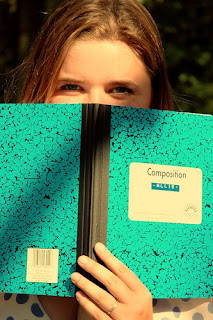 Blog Beginnings:
Since starting "A Literary Odyssey" in the early fall of 2009, the blog and I have undergone some major life changes. I began the blog in the midst of a bout with depression. At the time, I had been out of university for over year and was facing a second school year without a permanent teaching position. I felt stagnant, uninspired, and pretty darn worthless.

One night, in late August, I was up reading. My parents' house was quiet and the only sound was the steady flipping of pages as I read. It was then that the idea for a blog hit me. It wouldn't just be the act of writing everyday, but writing for a purpose. I stayed up until the early hours of the morning deciding just what I wanted to do. In my mind, I had grand intentions of doing something meaningful. It was only have discarding a half-dozen ideas that I glanced over at the pile of books on my nightstand.

I knew that it made perfect sense to write about books. Since I was little, I have loved reading. But, I also wanted to give myself a goal. I dug into an old drawer and pulled out my A.P. literature book list from twelfth grade and started researching. As I typed up the titles I would read, the rules came flooding into my head. I would make a list of classics to read, and I would concentrate on reading them one by one until the list was complete. Not only would it give me something to work towards, but it would help fill in all the holes from my education. I would be able to experience Dostoevsky, Tolstoy, Hugo, the Brontes, and more for the very first time.

And perhaps, it would somehow help me come to terms with being unemployed-with being a teacher without a classroom.

On September 1, 2009, I launched "A Literary Odyssey" and began reading the first book off my list, Homer's The Odyssey.

About Me:
A lot has happened since 2009 and a lot has changed, including the necessity for me to tell you a little about myself. :)

I grew up in a suburb of Detroit, and I have lived in the area my entire life. As a child, I preferred doing quiet activities, like reading, writing stories, playing with dolls, and crafting to be rowdy outside with my brothers. I have very vivid memories of my mother kicking me outside to play. :) I was fortunate that my parents didn't discourage my reading habits. My mom would take me to the library if I asked, and I started collecting books when I was young. On vacations, my parents would always roll their eyes when I would try to pack as many books as possible into my backpack (the largest one I could find). During visits with my paternal grandparents, my grandma would set me loose in their basement, where a bunch of old and musty books had homes on shelves-it was there I discovered Nancy Drew and The Little House series.

My reading habits only continued as I moved into middle and high school. I always excelled in English class. I read more than my teachers believed I did (I once got into it with my tenth grade English teacher because she thought I was lying about how fast and how much I read). I was also very invested in my history classes, so when it came time to move into college and declare a major, it made sense to me to go into English (I added History as a second degree in my freshman year).

I also knew I wanted to be a teacher. In middle school, I struggled after our family moved across town, and it was a couple of teachers who turned me around and inspired me. I was accepted and went to Michigan State University-which has a highly respected program for education. I enjoyed my time there and earn a Bachelor's in English and in History, as well as a minor in Social Studies and my teaching certification.

While I knew the market was tough and that teaching jobs were rare (this was in the midst of a recession in Michigan-auto companies and all), I assumed I would be lucky and get a job my first year out of school. When that didn't happen, I was heartbroken. And when it didn't happen the second year, I became depressed. That was when I started my blog as a way to pull me out of it.

Since that time, I have been taking long-term substitute positions as I could get them. I was fortunate in December 2010 to be hired in as a sub in the district I graduated from at one of the other high schools. It took another two years, but I was hired in at that same school during the summer of 2012 to teach English and History.

I have also gotten married since the time my blog started, to Matt, my high school sweetheart. Throughout all of my struggles with unemployment, Matt has been a constant rock and support for me.

Besides reading, I also love to write (working on a few novels), as well as listen to music, go for walks, and craft. I crochet on a fairly regular basis and scrapbook when I find the time. I'm still learning how to cook and sometimes write about what I'm making. I'm also a big TV nut, which I completely blame Matt for. I never watched TV before we were married. :)

FAQs:
Explain the format of your blog and the "250 list."
When I began blogging, I created a list of 250 classic titles to read from. For the first year/year and a half of the project, I allowed myself to only read titles from that list. I soon realized that I was constraining myself and was missing out on some great books (including more classics)! I eventually loosened the rules I made for myself and have been allowing myself to read what I wanted, while still trying to focus on the classics as much as possible.

I am also working on a larger classics list for The Classics Club. I'm hoping to finish the remaining titles from my 250 list before switching to that one, but so far, I seem to be dividing my time equally between the two.

How did you create your book list?
Like I stated above, I started with the book list from my A.P. Literature class. It had a long list of titles and authors, and I figured it would be a good starting point. I then put that list (it had around 150 titles at the time) on facebook, and asked friends for further recommendations. That brought the list up near 250, so I plugged in some holes, and voila, the list of 250 books was born.

The list I created for The Classics Club was based on more books by the authors I have come to love (you'll see "complete" works by quite a few), as well as those recommendations made to me over the years from other members of the blogging community.

Do you accept books for review?
I do accept some books for review. When I receive a pitch, I look it over very carefully before agreeing. Since my focus is still primarily on classics, I prefer books along those lines, but I have accepted some new releases and even a YA title or two. It's a case by case basis.

How long will it take you to finish the 250 list?
I only wanted to devote three years to the project when I began, but that time period is already here. I don't think I want to set a time period, but I am hoping to be done with the list by the end of 2013 so I can pursue the books on my Classics Club list more. :)

Do you own all the books you read, or do you check out from the library?
I have a large book collection (probably close to 2000 titles), and I am constantly acquiring new books. I prefer to own the books I read, simply so I can have them on my shelf for future rereads. And before anyone asks, I have a budget every month for how much I can spend on new books. :) I try not to go too crazy, and most months I don't go over my budget. Sometimes I do. :) I know that I am lucky to be able to acquire the amount of books I do, and I am sure that will change when I eventually have kids.

What makes you an authority on classics?
Absolutely nothing.

I do have an English degree, and I do teach literature, but the more I read, the more I learn how much I don't know. I do think I know a bit more than the average joe, but I am always eager to branch out and discover new writers and books. I love learning, so this is important to me.

Why do you write multiple posts for some books?
I like the idea of discussing the process of reading a book, rather than just my musings at the end. So, when I remember to stop and take the time to write, I will often write posts in the middle of my reading. This allows me to see how my thoughts and impressions are changing as I read. I also figure that I spend more time actually reading the book than musing about it when I'm done, so it makes sense!

You will notice that sometimes I don't bother to write more than one post. This could be that I read the title in one sitting, or I just decided not to. :)


If you have any other questions, feel free to ask me at any time! You may also contact me by email: aliteraryodyssey (at) gmail (dot) com