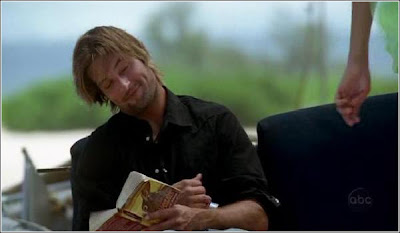 “Hell of a book. It’s about bunnies,” Sawyer to Kate in Lost (Episode: “Confidence Man” Season 1).

Matt and I have been watching a lot of Lost recently. When the show first went on the air, I made an effort to watch it, but only got through a couple of episodes. At the time, I was in college and had an irregular schedule so I always forgot to watch it. Besides, I am not a huge T.V. watcher anyway (I’d rather read), so I just plain forgot about it.

I ended up buying the first season on DVD when it came out with the intentions of watching it before the second season aired. I got all the way to four episodes before the end. Then the writers made me angry by removing a character and I refused to watch any more.

But Matt is a huge Lost fan and the last season starts up in January. So, we are trying to get through 5 seasons before then (which I highly doubt will happen). And I actually really love the show. It has quite a few sci-fi elements in it, which I love. It also has a ton of literary references in both the titles of episodes, to things characters say, to the books that surround the characters.

And the first book that appeared on screen was Watership Down by Richard Adams. It appeared in the hands of Sawyer, which threw me for a loop. But, knowing the writers of Lost, I know that there is some significance to everything they have chosen. On the cover of the book it says, “The timeless classic novel of exile, courage, and survival.” Where else would you find those things than on an island?

(And since I have seen a few episodes from other seasons and I know a few of the tricks, it was definite foreshadowing when A Wrinkle in Time popped up a few episodes later).

Anyway, I owe it to Sawyer that I chose Watership Down as my next book. Mostly because I also want to read about bunnies. Also, I love the fact that a popular T.V. show is making such amazing literary references. So, I am taking one of their subtle nudges and going with it. I am also sure that reading it will give me further insight into the mysteries that surround Lost and so when we keep watching, I can make little gasps of realization instead of Matt because for once, I will make a connection that he won’t.

(On another side note, it is infuriating to watch a T.V. show with someone who has already seen every episode. Especially when they give things away).

On to the bunny rabbits.

For anyone who is interested in the literature in Lost, here is a link to a Lost wiki (yes, there is such a thing) entry about the literature and literary references throughout the series: http://lost.wikia.com/wiki/Literature
Posted by Allie at 12:52 AM

Email ThisBlogThis!Share to TwitterShare to FacebookShare to Pinterest
Labels: A Wrinkle in Time, Lost, Matt, Richard Adams, Watership Down