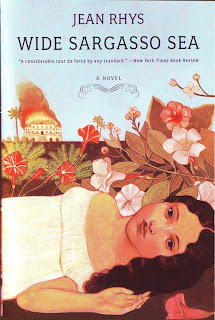 "You can pretend for a long time, but one day it all falls away and you are alone. We are alone in the most beautiful place in the world..."

I read this book in two short sittings. At under 200 pages, it was a fast and manageable length. Sometimes we need that.

That being said, I had to really motivate myself to not put the book down. I knew that if I did, I wouldn't pick it back up again.

It isn't that I hated it. I think what really bothered me was seeing it in connection with Jane Eyre, and so shortly after I finished Bronte's novel. Had I waited and read it a year from now, I might not have been so bitter about what Rhys did to Bronte's characters.

I get the point of why Rhys wrote the novel, and I love the idea that she gave life to a character we really don't interact with in Jane Eyre-the mad wife of Rochester. I like that she gave her a history, and showed us how Rochester met her and how they married. And I do like seeing a little of her dissent into madness.

What I didn't like were the differences in Rochester's character between the two. If you are going to do a mash-up of a classic novel, a prequel, or a sequel, you make sure you have the characters EXACTLY right, or fans of the original will hate your work. Simple as that. In this title, Rochester is a total jerk, with no regard for his wife's feelings. He comes across much harsher and uncaring in this one, which was not my perception of him at all. I can see how having a crazy wife would lead you to be that way, which is why his gruff exterior in Jane Eyre makes sense. But I didn't get it here. I don't know why Rhys made him out to be such a jerk.

But perhaps that is my love affair with Bronte's work stepping in.

I will say that I enjoyed Rhys' writing. There were some truly haunting passages, like the one below:

"'On the contrary,' I said, 'only I know how long I have been here. Nights and days and days and nights, hundreds of them slipping through my fingers. But that does not matter. Time has no meaning. But something you can touch and hold like my red dress, that has a meaning.'"

It chilled me a little a bit, especially after the events that led up to that.

I also love this next line-it is just as chilling:

"Now at last I know why I was brought here and what I have to do."

But even with the writing, something in me just couldn't handle the story (again, why I read it in two sittings). I was disappointed. I think I expected so much more from the story than what I got. BUT (yes, another but), I do think this was an important one to read. I like that Rhys captured the essence of the Caribbean during this time period. The effects of colonization on the location where the story takes place is clear and it was interesting to read about it from a different perspective, which was definitely a part of her purpose in writing the novel.

It just didn't work for me. Perhaps I'll give it another try in the future, but I highly doubt it.
Posted by Allie at 8:00 AM