Go Set a Watchman and To Kill a Mockingbird by Harper Lee. 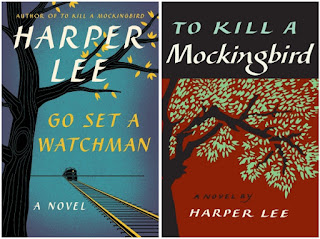 “People generally see what they look for, and hear what they listen for" (To Kill a Mockingbird).

I had not planned on reading Go Set a Watchman. I actually didn't pre-order my book until the day before it came out because I wasn't sure if I wanted to read something that had been shelved for 50 years and mysteriously "okayed" to be published by an author who was pretty adamant about not publishing again. But, curiosity got the best of me, and I decided to purchase it amidst all the controversy and early reviews. I also decided to reread To Kill a Mockingbird, as it had been a few years since reading it and the details were fuzzy (you can see this post for an earlier review). I don't cherish TKAM as a childhood favorite, which is why I think I had an easier time reading GSAW. While I did love Atticus as a character, I didn't have the heartfelt adoration and respect for him that so many others do/did.

During my reread of TKAM, I noticed a few things that I wanted to mention here, and that first quote above is along those same lines. Since I was reading it the day before I was going to settle in with GSAW, I paid particular attention to Atticus, the trial, and his relationship with Scout. And while it's still obvious that there is hero-worship on part of Scout, I did pick up on a few things I wanted to mention: 1. Atticus didn't volunteer to be Tom Robinson's defense attorney-the case was assigned to him, 2. In the closing argument of the trial, Atticus does little to talk about the crime or the matter of race-instead he pays particular attention the idea of justice and what that means as a jury, 3. Tom Robinson is found guilty and dies only a few weeks after the end of the trial when he tries to escape. His story in TKAM is wrapped up quickly and Scout doesn't dwell on it all that much.

These things stuck out to me because as I started to read GSAW, there were inconsistencies, and had I not JUST read TKAM, I might not have paid attention. First, in GSAW, they discuss the victim of the famous trial as being a 14 year old, but in TKAM, she's 19. There's also the matter that Henry Clinton talks about Atticus winning an acquittal for his client in that same case, when we know that Tom Robinson was found guilty and later died. There is also mention that Atticus took the case as Tom was a relative of Calpurnia, where that wasn't mentioned in TKAM at all. And while I know that doesn't detract from much from the main ideas in either novel, it does signal to me that perhaps there was reason why Lee didn't publish this second volume earlier. According to all reports and articles, GSAW is supposed to be the book that Lee wrote first, and after showing it to her editor, she was encouraged to focus on the childhood of Scout and Jem. And somewhere in there, Lee changed a few details. That unsettles me....if this was a true sequel, those details should match and an author and an editor would pick up on those things.

Anyway, the book was published and it stands as it is, and as readers, we have to understand all those circumstances surrounding it, and acknowledge that things might not be what we want them to be. There are passages in GSAW that are word for word in TKAM. Some characters are drastically different. Some are the same. But it's still Maycomb, and Scout is still Jean Louise Finch.

“Every man’s island, Jean Louise, every man’s watchman, is his conscience. There is no such thing as a collective conscious" (Go Set a Watchman).

As for the book itself, it takes place roughly 20 years after the events in TKAM. It opens with Jean Louise coming home to Maycomb by train. She lives in New York City and returns for a couple weeks each year to visit with family. On this trip, she returns to a man that she maybe loves, but will never marry-Henry Clinton, or Hank, who works for Atticus and is a rising star in Maycomb. We are also reintroduced to Aunt Alexandra, who is still as sassy and overbearing as in TKAM. One of the highlights of the novel is when Jean Louise says, "Aunty, why don't you go pee in your hat?"

Really, the best pieces are those where we see glimpses of Scout from TKAM. There are quite a few flashbacks to her childhood, which includes pieces of young Jem, Dill, and Hank. These moments offer the few lighthearted passages, and it's obvious why TKAM was so successful, just based on those passages. They are filled with childhood glee and ridiculousness that we all remember from our own childhoods.

However, as the book progresses, it spins to a more serious note when Jean Louise follows her father and Henry to a Citizens' Council meeting and learns that they are both participating in what she sees as racist and immoral behavior. When she leaves, she is so overcome that she becomes physically ill...

“It happened so quickly that her stomach was still heaving. She breathed deeply to quieten it, but it would not stay still. She felt herself turning green with nausea, and she put her head down; try as she might she could not think, she only knew, and what she knew was this:The one human being she had ever fully and wholeheartedly trusted had failed her; the only man she had ever known to whom she could point and say with expert knowledge, “He is a gentleman, in his heart he is a gentleman,” had betrayed her, publicly, grossly, and shamelessly" (Go Set a Watchman).

The remaining 150 pages or so of the book focus on the conflict within Scout concerning her relationship with her father and the new light she sees him in. This is the unsettling portion of the book, as Scout begins to see that not only is her father not the man she remembers and adores, but the people around her are the same. She, instead, is color-blind.

"Blind, that's what I am. I never opened my eyes. I never thought to look into people's heart's, I looked only in their faces" (Go Set a Watchman).

She searches out the people closest to her and lashes out. There are a few conversations with her uncle, Dr. Finch, as she tries to come to terms with this new knowledge and he attempts to calm her. He tells her more than once that Atticus has always been the same, but now that she has grown into her own person, she is just breaking with that childhood vision.

And that is what upsets readers. I think that for many, who grew up loving and adoring Atticus Finch as a role model and mentor, as the justice-seeking father, their own visions of Atticus in that light have popped. Because we all have childhood interpretations of the people closest to us. I know that when I was young, I shared many of the same political beliefs as my parents-because they were my parents. They were always right and heroic and good all the time. It is only as I have grown older, become an adult in my own right, and began to break that connection that I see that there are gray areas. There are areas where my parents and I do not see eye to eye, where I might shame them because of my beliefs and vice versa. I think that struggle is something many of us go through.

There comes a point in all of our lives where we break from our parents and we see them for who they truly are-human.

That is the disturbing aspect in GSAW. Atticus is no longer romanticized by Scout's childhood observations and understanding of his character. Instead, we, as adults, and Jean Louise, as an adult, see the truth in who he is. And while she fights Atticus, screams at him, and attempts to force her opinions at him, he is who he is.

“You never really understand a person until you consider things from his point of view... Until you climb inside of his skin and walk around in it" (To Kill a Mockingbird).

For Jean Louise, it's a coming of age. She learns that she must have her own beliefs, her own way of seeing the world. She must finally learn to live according to her own values because Atticus isn't who she believed him to be.

That is the challenge in this book. That things are not what they seem to be. That there might be another perspective, another voice to listen to, a challenge to look past what we think we see and believe and listen to everything that is alluded to. That is not easy. And in this current time, where we are having the same conversations about race, privilege, and prejudice, it is even more important to understand what I believe to be the importance about Jean Louise's realization: There will always be those who don't see things in the same way we do. We might hate them for it, think they are misguided, ignorant, or uncaring, but there are emotions beneath the surface that tell more of the story. We need to always listen, to stand up for our own beliefs, and try to better the world around us, but it is never easy.

"The time your friends need you is when they're wrong, Jean Louise. They don't need you when they're right" (Go Set a Watchman).
Posted by Allie at 5:16 PM