Book 1: The Art of Translation 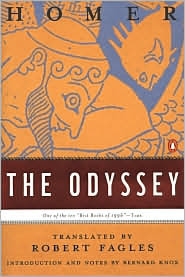 There are many different editions of many of the classics; different translations, new covers, prestigious introductions by well-known scholars, new footnotes, etc. The edition I own and am reading from is the one by Robert Fagles, published in 1996. My dear tweed coated professor picked the edition, which has won many awards for its translation. To be honest, the only other translation I’ve read is the watered down version of The Odyssey I read in high school.

I love the edition I own. Fagles really brings the story to life and I am finding myself getting really into the story and the choice of words. It really gets you thinking about why that word was chosen instead of another, and I suppose translation is a difficult art because of that. For example, the Inuit have many, many different words for “snow” and each one means a different thing. With that many choices, how does a translator choose the correct term to portray the exact meaning that the original author intended?

With works like The Odyssey, the job is much more difficult. The Odyssey and The Iliad, attributed to have been written by the figure Homer, are oral histories and were never really written down by Homer himself (if he actually existed). Instead, they were stories passed down from bard to bard until eventually, someone wrote down their version. If you think of the game telephone you might have played in elementary school, you might see how the story might have been distorted from the original.

This is where the bards come in. Bards were once the most highly celebrated individuals in Greek society. They were responsible for remembering the past and passing it down, as well as entertaining. Even within The Odyssey the bards play a huge role. There is a scene I just finished reading where the bard Demodocus is called to entertain the crowd and Odysseus. He recalls the story of the Trojan Horse, which at this point in the story had happened more than ten years before. His goal as the bard is to be as close to the original details as possible. He succeeds by driving Odysseus to tears with the memory of what he had done in Troy.

I suppose all this is rambling is a long way of saying that Robert Fagles and the other translators are really doing the same job as the old Greek bards. They are trying to stay as close to the meaning and intent of the original as possible and still capturing readers with great stories.

I’ve also been thinking about how authors translate the stories in their heads to paper and whether the result is the story they envisioned. From my own experience writing, I seem to have a hard time getting the rights words down to really get at what I am feeling. It must be the same for song-writers and for directors. How can you truly portray everything you feel and everything you see? It is a difficult task. I can’t help but admire people who are successful in accomplishing that. And I can’t help but love the end result of their hard work.

They did the work so I didn’t have to. I can just sit back and enjoy.
Posted by Allie at 9:40 PM

Email ThisBlogThis!Share to TwitterShare to FacebookShare to Pinterest
Labels: Homer, Odyssey, The Iliad