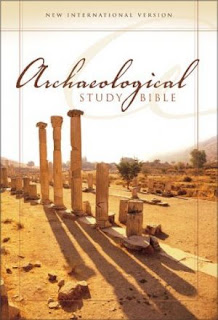 Sometimes I make plans to do things with the intention of getting to them "someday." "Someday" always seems to be pushed back, and sooner or later, I come to realize that unless I set a goal for myself, I'll never get to those plans.

Some of that inspired my reading of the classics and this whole large project I have going on here. Of course there were other reasons, but I figured, why wait?

I'm announcing today that I am taking on another project, but one that may be more personal. I'm going to read through the Bible.

This is something I've always had the intentions of doing "someday." I have read portions of it in the past, but I have never studied it. I feel that urge and need now. My urge and need was inspired by a few events and people from the last few weeks.

First, the lovely Bellezza inspired me to really start thinking about it when she gave up all literature BUT the Bible for Lent. I enjoyed reading her thoughts as she read the Bible, and I made a note to get to it sooner, rather than later.

Then, the Saturday night before Easter Sunday, my sister-in-law was baptized and confirmed. It was a beautiful ceremony. But it got me thinking about how little I know of Biblical history and faith. I began searching for a way to incorporate this into my life then.

Last, Jillian posted last week about her own plans to read the Bible. She has purchased the version you see pictured, and after her explanations of it, I was intrigued. I decided to just begin reading the Bible after reading her post.

Since her post, I have been looking at the Bibles we have here at home, as well as doing some searches online for an edition. My husband and I have quite a collection.
After looking at the editions and versions here at home, I realized that if I really wanted to study the Bible, I needed a Study version. There are many to choose from, so I had to figure out which edition.

After trips to two bookstores, I ended up deciding on the same version Jillian chose. I wanted a Bible that would not only help my faith, but also my understanding of the Biblical stories and history. I felt it would be a great study companion (I am sure I will also reference some of our other editions here at home as well).

My goals for this project are to read a little each week, starting at the beginning. While the eventual goal is to read the whole thing, it isn't a race or something I am going to get accomplished soon. I just want to be in the process. I am hoping that since I will be reading this alongside my classics, I'll be able to pick up on a lot of the references, etc that go over my head now. The Bible as a text has influenced MANY a book.

I won't be making regular posts or reviewing it in any way. Instead, I have plans to create a separate page that I'll update from time to time with my general thoughts and progress. I think that'll be the best way to keep myself on task. :)

I'm excited to begin and explore the depth of it-especially all those little books we don't usually hear much about.

I'm curious, how many of you have read the Bible? Just pieces or the whole?
Posted by Allie at 3:00 PM