Book 90: The Character of Silas Marner. 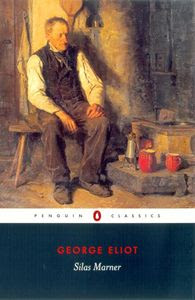 I really love the character of Silas Marner. There is something about his transformation from the beginning of the novel until the end that I truly love.

At the beginning of the novel, Eliot begins to describe how Silas came to live in Raveloe. In his hometown, he was accused of a theft and escaped, becoming a recluse from society. He refuses to befriend people in the the new village, and instead spends all his time in his cottage weaving. It is all he has. I love this passage about his loneliness in particular,

"He seemed to weave, like the spider, from pure impulse, without reflection. Every man's work, pursued steadily, tends in this way to become an end in itself, and so to bridge over the loveless chasms of his life. Silas's hand satisfied itself with throwing the shuttle, and his eye with seeing the little squares in the cloth complete themselves under his effort. Then there were the calls of hunger; and Silas, in his solitude, had to provide his own breakfast, dinner, and supper to fetch his own water from the well, and put his own kettle on the fire; and all these immediate promptings helped, along with the weaving, to reduce his life to the unquestioning activity of a spinning insect. He hated the thought of the past; there was nothing that out his love and fellowship toward the strangers he had come amongst; and the future was all dark, for there was no Unseen Love that cared for him," (14).

He is such a lonely old man that I really just want to reach in an give him a hug. Hurt by people he considered friends, he has no choice but to retreat into himself to protect himself from hurt. I can't say that I really blame him. If your best friend framed you, took your girl, wouldn't you feel like you had no one to turn to? I can't blame Silas for escaping and hiding, protecting himself from ever making that kind of connection again.

What I think adds to the strength of Silas' character is how the others in the village view him. He is the center of the town's gossip for a bit, with the townspeople wondering how he came to Raveloe, and why he chooses to remain so silent and removed.

Then Silas begins to hoard his gold. As a weaver, he makes little money from what he makes and sells as he stashes away whatever he can. He collects it, counts it, and it soon becomes his obsession.

One of my close friends who has read this always says that it doesn't make sense for Silas to become a money hoarding fiend. I think it makes perfect sense. For a man who has nothing but his work, doesn't it fit that he would become obsessed with the product of what he makes? He has no one else to speak to, no one else to rely on, so his money becomes his life and his ultimate downfall (but I'm not there yet).

In any case, I am spending more time on this reread soaking in his character, taking in Eliot's little nuances. While Middlemarch seems to overshadow this slim little volume, I think I much prefer this.

What do you think of Silas if you've read this one? love him? hate him? Do you think that someone who is completely alone would justifiably turn to the one thing they can control (in this case, money)? I'm interested to see what you all think. :)
Posted by Allie at 8:00 AM