Book 112: "The Eumenides" (The Oresteia) Finished. 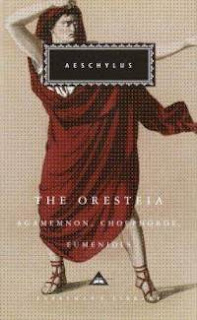 The last piece in the Oresteian trilogy by Aeschylus is "The Eumenides." When we left off in "The Libation Bearers," Orestes had exacted revenge on his mother for killing his father. After the murder of his mother and her lover, Orestes was chased off by the Furies, since now his mother's death must also be avenged.

In this third and final piece, Orestes escapes to Athens and pleads for Athena's help. A trial is held and not only is Orestes tried for the murder of his mother, but also Apollo (who offered him guidance). It is an interesting court scene, with Athenians serving as the jury.

I really enjoyed this piece of the trilogy. It finally puts an end to the circle of violence (to recap: Agamemnon sacrificed one of his daughters before leaving for the Trojan War, Clytemnestra and new lover murdered Agamemnon and Cassandra on their return from the war in revenge, and Orestes murders Clytemnestra and lover because they murdered his father. Complicated? yes).

During the trial, Apollo defends Orestes and basically explains that in a marriage, a man is more important than the woman-so defying the husband is worse than defying the wife. I thought this was an interesting way of proving a point, and while I certainly believe that partners in marriage are equal, it wasn't so in older societies.

Anyway, Orestes trial comes to a vote and the vote is tied. Athena sets a precedent and acquits Orestes, proclaiming that in hung juries, the accused should always be acquired from that point forward (she says something about not being too harsh).

While the first piece of this trilogy was by far my favorite, I would have to say that this comes in a close second. There is a lot of imagery in this scene as Orestes tries to escape the Furies and their need for vengeance. I also really enjoyed seeing Athena again. She has a huge role in The Odyssey and seems to be one of the Greek gods that interferes in a positive way in mortals' lives (at least from what I have seen).

The trilogy was fascinating, but now I need to read Electra and others to see what happens to Orestes' sister, as well as different takes on the family saga. And, once more, I was reminded that Greek works are not as difficult as I seem to think they are. Sure, they read differently, but that is solely because they are meant to be performed out loud. I never have to struggled through them like I think I am.

I also highly recommend the translation I read (by the wonderful Robert Fagles), as it really does capture the "out loud" qualities of the trilogy.
Posted by Allie at 8:30 AM