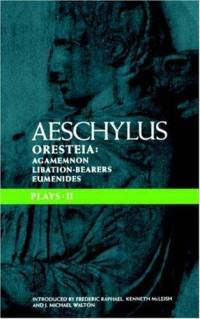 "The Libation Bearers" or "The Choephori" is the second in the Oresteia trilogy by Aeschylus. In the first play, "Agamemnon," we saw Agamemnon come home from the Trojan War to be murdered in his own house by his wife and her new lover.

This second play picks up where the first left off. Orestes, Agamemnon's son, arrives at his father's grave to mourn. He is accompanied by a friend, and they hide as Orestes' sister, Electra, also arrives at the grave with a company of women mourners (also known as the libation bearers). The siblings meet and once they prove their identity to one another (I think, from what I can remember, that Orestes was banished from home at some point).

Once the siblings known one another, there is a really long exchange between Electra, Orestes, and the libation bearers where they recall a dream, interpret it, and decide that Orestes must avenge his father's death and kill Clytemnestra (his mother).

Orestes and his friend disguise themselves, for back to his home, convince Clytemnestra that Orestes is dead, and eventually murder Clytemnestra and her lover. At the end of the play, Orestes is chased by the Furies while the chorus explains that rather than ending the cycle of violence, it continues as Orestes should not have killed his mother for killing his father.

Confused? I was a bit. But, I enjoyed seeing what happened after the first murder of Agamemnon. And from what I recall from The Odyssey, Agamemnon doesn't tell Odysseus what has happened to his son.

What I was surprised to see (and I really shouldn't have been), was the level of interference, again, from the gods, as well as from the dead. When they are consulting the dream, they think of what Agamemnon and the gos were prefer, rather than what might be just. This goes back to the whole "eye for an eye" ordeal, in that by taking revenge, you end up in an endless cycle (isn't this why gang violence gets so out of control?). Yes, of course Clytemnestra wasn't right in killing her husband to be with her lover, but it also isn't up to Orestes to take it into his own hands.

After all, isn't this why we have law and government? So that they can "clean up" the mess we make?

Anyway, it was interesting to see Orestes out his mother for the murderess she is. He really digs into her and rips her apart before doing the dead.

But what I really enjoyed about this play was the chorus and the libation bearers. One of the things I should have remember from reading Lysistrata earlier this year is that the chorus not only tells the audience backstory and much-needed information, they also interact with the characters on stage. I almost began to see them as the conscience for each of the characters as they grappled with their decisions.

Well, there is one more piece to go, and I know it'll start with Orestes still fleeing from the Furies, who want vengeance on him for murdering his mother. And since I am unfamiliar with what happens next, I am curious to see how it all plays out!
Posted by Allie at 8:30 AM