Book 139: On First Impressions and Imagery. 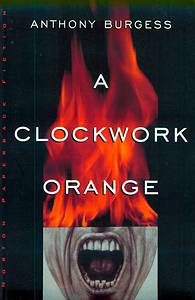 I finally began to sit down with A Clockwork Orange after mulling over your comments on my book stats post. I was a little frightened when some of you suggested printing a glossary or familiarizing myself with "nadsat," the slang of the characters within the novel.

I decided against it, after thinking about how often I have to rely on context clues when I read high fantasy. I figured one or two words wouldn't throw me completely off.

Are you laughing at me yet?

I had to reread the first chapter a couple of times to get into the flow of the novel, and I find myself concentrating very hard on what I am reading. But as I am moving forward in the novel, I find that the slang gets easier to understand as my mind begins to make connections between the words Burgess uses and my own English word to replace it. And my idea about using context clues? Hehe. When a sentence is comprised of mainly slang, context clues are essentially no good.

Let me show you what I mean. Here is the first portion of the novel taken from chapter 1:


"'What's it going to be then, eh?'
There was me, that is Alex, and my three droogs, that is Pete, Georgie, and Dim, Dim being really dim, and we sat in the Korova Milkbar making up our rassoodocks what to do with the evening, a flip dark chill winter bastard though dry. The Korova Milkbar was a milk-plus mesto, and you may, O my brothers, have forgotten what these mestos were like, things changing so skorry these days and everybody very quick to forget, newspapers not being read much neither," (3).

See what I mean?

But once you get into the flow of how young Alex talks, it becomes easier and easier to understand. It is just getting over that hump of understanding what the heck is trying to say.

The beginning of the book transitions from beautiful descriptions and detail, to horrible violence and pain. I get what Burgess is trying to show me-that youth can be insane and violent and misunderstood-but that it has consequences, and I know those consequences are coming for Alex.

Very early on in the novel, Alex and his droogs are out on the town and commit multiple acts of violence towards the people they come across. They rip up a professor's books and break into a couple's home-beating them both and gang raping the wife. It is violent and angry and gives the reader the impression that these boys cannot be human to do these things to others. I had to set the book down for a moment after the rape scene. It was disturbing and something I wanted to avoid thinking about.

But what drew me back to the book was the writing. Because as crazy and as insane as the boys are, they're people.

There is a passage that I absolutely loved. I actually posted it on my Facebook Sunday afternoon because I was blown away by the power of the imagery and the words....

“Oh it was gorgeousness and gorgeosity made flesh. The trombones crunched redgold under my bed, and behind my gulliver the trumpets three-wise silverflamed, and there by the door the timps rolling through my guts and out again crunched like candy thunder. Oh, it was wonder of wonders. And then, a bird of like rarest spun heavenmetal, or like silvery wine flowing in a spaceship, gravity all nonsense now, came the violin solo above all the other strings, and those strings were like a cage of silk round my bed. Then flute and oboe bored, like worms of like platinum, into the thick thick toffee gold and silver. I was in such bliss, my brothers," (37).

In that passage, I could almost be Alex. As someone who plays an instrument (trumpet), I know how it feels to be in the midst of classical music. There is something so powerful and wondrous about music written centuries before. It captures the same sense of human emotion that we feel today-love, power, loss, and yes, violence. And I love that Burgess shows that while Alex has a crazy yearning for violence, he can feel that power in things other than himself, like music.

I can't wait to keep reading-to see where Burgess takes Alex-and whether Alex will redeem himself and grow up.

I think I'm going to love this when I finish.
Posted by Allie at 8:00 AM