I am attempting to "catch up" on all the books I've read but haven't discussed this fall. Since school started, I've read about 22 books. I find that to be kind of amazing considering the amount of stress and work that goes into a first full year of teaching, but I've been finding time, here and there, to relax and enjoy some fun reads.

This edition is really going to focus on some of the YA/MG books I've been reading. In particular, I decided to mini-review some of the series and sequels I've been hooked on. Enjoy! 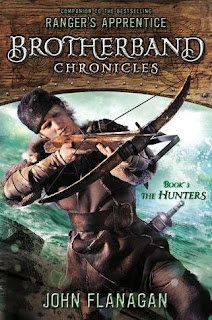 The Brotherband Chronicles Book 3: The Hunters by John Flanagan.

I consider this to be one of my biggest guilty pleasures, but at the same time, I think that Flanagan's books are just really entertaining and good. I know what to expect when I pick one up, and he hasn't disappointed me yet (after14 titles).

This series is the companion series to The Ranger's Apprentice. It is set in the same world, but features a different culture, which takes a lot more skill than it seems. That's honestly one of the major reasons I love these books. Flanagan manages to weave his narrative through multiple cultures, and show that no one "culture" or people is the enemy-only those with ill intentions are the enemy. And, I love that the books are action-packed, have good moral lessons, and are just gosh-darn FUN to read. I know that quite a few of my high schoolers would brush these off as too young, but I know that these would be a hit with the middle school crowd. 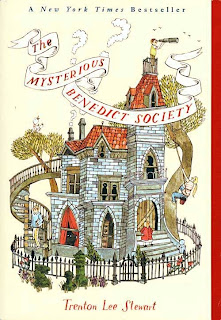 I actually picked this one up a couple of years ago when a good friend recommended the series to me. I believe, at the time, that the third title had just come out, and she pretty much shoved the first two into my hands (I bought the third one when it came out in paperback to "match" ). It languished on my shelves and I finally felt pulled to it in the first month of school.

I wasn't sure what to expect from this one, but I was highly entertaining. The four children that are the main characters are highly intelligent-just in different ways. After their intelligence is tested, they form the "mysterious Benedict society" to work for Mr. Benedict against the evil Mr. Curtain.

I really enjoyed the ingenuity of all four kids. At times, I felt a bit stupid as they worked through challenges, but the book was fun, lively, and kept me flipping pages. 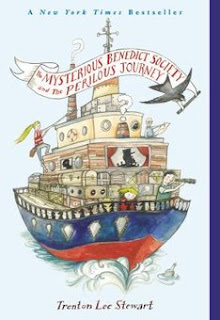 The Mysterious Benedict Society and the Perilous Journey by Trenton Lee Stewart.

Book two in the trilogy picks up shortly where the first one left off. The evil mastermind has escaped and the kids must journey to find more solutions to the problems arising at home.

In this novel, the kids journey away from home and encounter some of my favorite characters. I particularly enjoyed the Ten Men (evil men with briefcases that contain all kinds of horrid torture devices).

Like the first novel, the kids' ingenuity surprised me, and I even found myself laughing out loud. The scenes on the island were some of the creepiest and suspenseful! By far, this was my favorite of the three and had some of the best Constance moments in the entire series (Constance is one of the four children, and MAN, she had me cracking up at multiple points in the series). 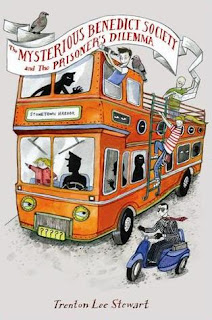 The Mysterious Benedict Society and the Prisoner's Dilemma by Trenton Lee Stewart.

The third and final volume in the series ended with a bang. Again, like the two previous titles, it was packed with action-filled scenes and puzzles. I really enjoyed the new dynamics between the children as they grew up. Sticky and his battle with proving how smart he actually was melted my heart.

However, I did feel like the story dragged in some parts and I just wanted the final confrontation to happen. I was also more than a little annoyed with the Ten Men and their stupid torture devices, Mr. Curtain, and the adults' general stupidity regarding their children. With that said, it was still a very quick read and a good ending to the trilogy. I imagine that these would be great fun to read with kids!

I also need to say that I adore all three of these covers. The black silhouettes really just make them, don't they?

The Kill Order, The Maze Runner, The Scorch Trials, and The Death Cure by James Dashner.

I read all four of these in pretty quick succession, so they run together a bit. For those of you who haven't read the series, I should mention that The Kill Order is actually a prequel to the other three. I read it last since it was published last, but I don't think the order completely matters...

Now, I enjoyed these to a certain extent. But by the time I reached The Death Cure, I was annoyed with the series. There were parts that seemed incredibly drawn out, other important moments that felt rushed, and the narrator grated on my nerves by the end. I needed more information about the world than I got, and by the time I did get some of the answers I wanted, I forgot what my questions were in the first place. I really just felt incredibly rushed through the three books and wanted to be done with the series to say I finished it.

However, The Kill Order was something I really enjoyed. I liked the sense of urgency, the slow build of information, and the heart-wrenching climax. While I never felt like I connected to the main characters in the main trilogy, I felt incredibly drawn to the characters in The Kill Order. I could sympathize with them, root for them, and gasp at just the right moments.

If you're really big into the dystopian fad that is everywhere, then these are books you really can't miss. And I'm not saying they were awful-more that I tired of the series quickly.
Posted by Allie at 7:00 AM