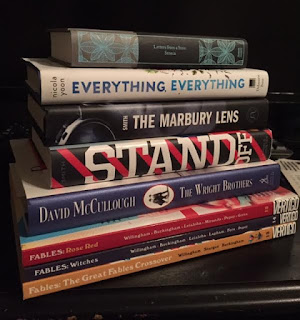 It's been a little while since I went out and bought some new books, but a few have wandered into my hands in the last few weeks, so why now share them?

First, I received 3 books from my friend Adam over at Roof Beam Reader as a part of a book swap I run on Facebook. He got me Letters from a Stoic by Seneca (top), The Marbury Lens by Andrew Smith, and David McCullough's The Wright Brothers. He also gave me a slew of other gifts, including my new favorite tote bag (covered with text from The Odyssey), and tea, which has been coming with me every morning since school started. I had to grab the Smith title off my nightstand for this picture, since it's been sitting there, waiting for a good moment for me to start it. :)

I also ordered 2 books a week ago. First, the new Andrew Smith title, Stand Off, which is a sequel to Winger, one of my favorites by Smith. I'm anxious to get into it, but I know it's one of those books I'll read straight through. Perhaps this weekend?

I also ordered Everything Everything by Nicola Yoon after hearing a lot of great things. I think I might save it for the readathon though...something quick after some classics. The cover is also fantastic. And that IS important. ;)

The last three at the bottom are three more titles from the Fables comic series I've been reading. I stayed away for a month after I hit the end of one story arc, but I'm ready to dive back in and finish the series before the end of the year (there are 22 total, and I have 13-15 in my new stack). Those are also going to live on my nightstand, as I can easily fly through them on a weeknight...when the grading eases up.

It's funny, I used to be pretty crazy about ordering books all the time, but I've become to realize that I'd rather purchase things that I want to live on my shelf for a bit. I guess I've become more selective? I also went through my books back in August and donated a few boxes (and sold a bunch too-that's where I got the money to pay for the Fables titles). I still have quite the library, but I got rid of a lot that I know I'll never read again.

Let me know what books you've recently picked up!