Every year, Jaime at the Perpetual Page Turner hosts an end of year survey for bookish folk to recap what they read the previous year. I've filled it out a number of times, as I find it to be a great way to see what I loved, hated, and want to do more of in the new year.

I'm going to answer as many questions that apply to my reading as possible, but I delete those that I didn't have an answer for.

Number Of Books You Read: I read 75!
Number of Re-Reads: 13 (and that doesn't include any Fables. I'm sure I read the first 8 before)
Genre You Read The Most From: Young Adult or Graphic Novels.
Pages Read: 19953

1. Best Book You Read In 2015?
Looking at my list, there are a few that stand out:
-All the Bright Places by Jennifer Niven
-The Martian by Andy Weir
-Ghost Medicine by Andrew Smith
-Everything I Never Told You by Celeste Ng

Truthfully, The Martian probably wins. I mean, I convinced my husband to read it....

2. Book You Were Excited About & Thought You Were Going To Love More But Didn’t?
Perhaps The Girl on the Train, although, I don't usually read thrillers, so I guess I wasn't surprised that I didn't love it all that much.

Also want to say how disappointed I was in the end of Fables. Boo.

Oh, and Serena. I'm sure the only reason I finished it was because I was in the care driving home from Florida and just needed to get through it.

And one more...Where'd You Go Bernadette? I didn't get it.

3. Most surprising (in a good way or bad way) book you read?
I would have to give this to two books-The Alex Crow by Andrew Smith because of pure craziness. And The Red Pony by John Steinbeck...I just loved it.

4. Book You “Pushed” The Most People To Read (And They Did)?
Definitely The Martian. Not only did I convince my non-reader of a husband to read it, I've pushed it on fellow teachers and some other friends.

5. Best series you started in 2015? Best Sequel of 2015? Best Series Ender of 2015?
I devoted a big chunk of time this year to reading all 22 volumes in the Fables series. It started out amazing...and then fizzled.

The only other series I read was Daughter of Smoke and Bone, which I enjoyed for what it was.

6. Favorite new author you discovered in 2015?
Looking at my list, I read a lot by authors I've previously read. So...I would have to say Liana Moriarty. I enjoyed What Alice Forgot more than I thought I would and want to read more of her work.

7. Best book from a genre you don’t typically read/was out of your comfort zone?
The only real book I read outside my comfort zone was The Girl on the Train, and while it wasn't my cup of tea, it was still good (if that even makes sense).

8. Most action-packed/thrilling/unputdownable book of the year?
There were a number of titles I flew through in one sitting-All the Bright Places, Landline, and Ghost Medicine  all spring to mind. But really, it goes back to The Martian.

9. Book You Read In 2015 That You Are Most Likely To Re-Read Next Year?
The Martian? No, really. I actually listened to it this year, so I think reading through the print version might be in the cards.

10. Favorite cover of a book you read in 2015?
I loved the edition of Ethan Frome I read in the spring: 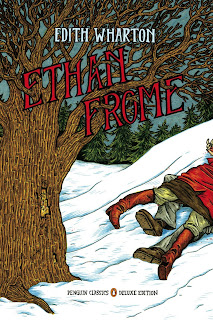 11. Most memorable character of 2015?
Because it was the most memorable book at the end of the year, Troy Stotts from Ghost Medicine.

12. Most beautifully written book read in 2015?
Definitely a tie between Everything I Never Told You and A Lost Lady.

13. Most Thought-Provoking/ Life-Changing Book of 2015?
I think Go Set a Watchman offered everyone a lot to think about.

15. Favorite Passage/Quote From A Book You Read In 2015?
I'm actually going to pull the quote from the opening in All the Bright Places, even though it's not by Niven...

"The world breaks everyone, and afterward, many are strong at the broken places." Ernest Hemingway

16.Shortest & Longest Book You Read In 2015?
The longest book I read was Dreams of Gods and Monsters by Laini Taylor at 613 pages. Truthfully, that shocked me. I love reading chunksters!

The shortest is Ethan Frome by Edith Wharton (truthfully I read a lot of short books this year).

17. Book That Shocked You The Most
All the Bright Places. For sure.

Oh, and The Alex Crow. Because really.

18. OTP OF THE YEAR (you will go down with this ship!)
(OTP = one true pairing if you aren’t familiar)
Snow and Bigby in Fables

19. Favorite Non-Romantic Relationship Of The Year
I really loved the relationship between the friends in Ghost Medicine.

20. Favorite Book You Read in 2015 From An Author You’ve Read Previously
All 3 of the Smith titles I read this year were fabulous, with Ghost Medicine taking the top spot.I also really enjoyed A Lost Lady by Willa Cather.

21. Best Book You Read In 2015That You Read Based SOLELY On A Recommendation From Somebody Else/Peer Pressure:
So many...but The Martian springs to mind!

23. Best 2015 debut you read?
Probably Everything I Never Told You.

24. Best Worldbuilding/Most Vivid Setting You Read This Year?
Brandon Sanderson's Mistborn. Just a fabulous setting. AND I STILL NEED TO READ THE REST OF THEM.

25. Book That Put A Smile On Your Face/Was The Most FUN To Read?
I loved the memoirs I read by Amy Poehler, Tina Fey, and Mindy Kaling. All had me cracking up at different points.

26. Book That Made You Cry Or Nearly Cry in 2015?
All the Bright Places and Ghost Medicine.

27. Hidden Gem Of The Year?
Ghost Medicine. Seriously. It was one of the last books of the year and it was so flipping good. More people need to read Smith. Period.

28. Book That Crushed Your Soul?
All the Bright Places. It reminded me of some students. Broke me down over and over again.

29. Most Unique Book You Read In 2015?
I really loved Anya's Ghost. I definitely think it was incredible unique!

30. Book That Made You The Most Mad (doesn’t necessarily mean you didn’t like it)?
Teacher Man. I just...thought I would get so much from it, but I found it so dry....