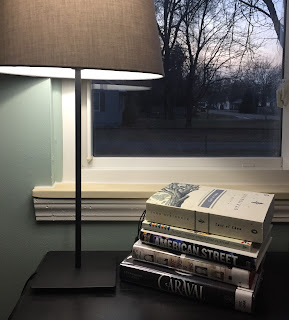 Just a quick post tonight to let you know that I am planning on participating in the #24in48 readathon this weekend. I originally wasn't going to sign up, as this week was our exam week and I was sure I would be taking home piles of grading, but somehow I conquered the massive piles of things to grade! I should be heading home tomorrow with nothing to grade and only minimal prepwork to do for the new semester.

I know I probably won't get to read for the full 24 hours, but I'm going to give it my best shot. Our kitchen should be finished at some point this weekend (hooray!), so I'll need to get it organized and put stuff away.

BUT! I still want to read all of the things before the new semester gets all crazy, and this weekend is perfect.

I picked out a small stack of things I'm interested in, but it might change. One top of that pile is Steinbeck's East of Eden, which I am already halfway through. I'm planning on snuggling in bed as soon as I publish this post to read more. Assuming I don't finish it between tonight and tomorrow, it'll be first up on Saturday.

Underneath that (that thin title), is another book from my TBR Challenge-E.M. Forster's Where Angels Fear to Tread. I was looking for a smaller book off that list that I could try and tackle in early February and it jumped out at me (the cover is gorgeous). I'm not sure that I'll get to it, but it's a good option if I feel like I want another classic.

The third title is American Street by Ibi Zoboi. I've been meaning to read this for months, but haven't had a chance. Even if I don't get to it this weekend, I will definitely be reading it sooner rather than later. It takes place (partially?) in Detroit, so that by itself sold me.

The last two books are actually books that our district choose for our Inaugural Battle of the Books competition we're having between the high schools. I promised myself I would read all 6 before the competition in early May, so I need to get moving. I read Winger by Andrew Smith when it debuted, so that's one down (he agreed to Skype in with our kids during the competition-I'm SO EXCITED). I also read John Green's Turtles All the Way Down when it came out. So, these were my next two picks.

First up will probably be One of Us is Lying by Karen M. McManus. All the kids who've read it already keep telling me to read it. Truthfully, this will probably be the book I pick up after East of Eden. It references a similarity to The Breakfast Club, so I am intrigued.

The last book is Caraval  by Stephanie Garber. It's actually the first book in a trilogy, so I'll probably end up reading the rest of it when they come out. I know very little about this one except that another teacher told me it was a YA version of The Night Circus...we shall see because that's a lot to live up to.

I might grab some other things off my shelf as I go through the weekend. I do have a professional development book that I need to read 2 chapters of for my book club at work (called Creating Cultures of Thinking), so that will be thrown in the mix. I've also been craving a biography, but none are jumping out at me at the moment. We'll see what happens!

Are you participating? Let me know so I can check in with you! I'll try and get a post up here, but I'll most likely be updating on twitter (alliedliterary) and on Instagram (aliteraryodyssey).
Posted by Allie at 6:34 PM