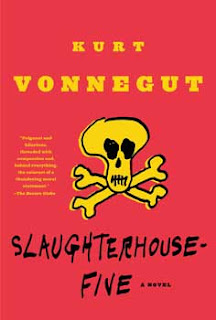 One of the things I love most about Kurt Vonnegut is that he always writes his books in a way where the reader is left wondering if he has a point. Saying it that makes it seem like a horrible way of writing so I have to explain what I mean.

In Slaughterhouse-Five Vonnegut begins by writing the tale in first person, from his own point of view. His reasons for writing the book are discussed in the beginning. During WWII, Vonnegut was in Dresden during the fire bombings. It was a horrible massacre and killed thousands of people, but was hushed up for years after. Vonnegut is haunted by what he saw there and his own experiences, so his goal is to write a book about his experiences.

Then the narrative switches to a man named Billy Pilgrim. The book follows Billy as he flows in and out of memories and time-to the moments before he arrived in Dresden, to his present, and to the time when he was happiest.

It is an odd way of telling a story. At first you wonder if Vonnegut is ever going to get to describing the fire bombings in Dresden. He spends pages and pages recounting Billy Pilgrim's life before and after the war, seemingly with no point.

It is only when Billy heads towards Dresden does Vonnegut's point sink in.

It was too difficult for Vonnegut to write about himself and his own experiences, so he created a man that he could throw his troubles on. After seeing he slaughter, Billy goes a little crazy. His life is forever altered by what he saw. That is Vonnegut's point-war changes people and impacts people in a way that those who stayed home can never understand. Billy's family thinks he is crazy because they weren't there. They didn't experience what Billy saw and his daydreams away from his life are his own way of escaping what he experienced.

War does something to the people who were there, and for those who experienced horrible events, like the bombing of Dresden, well, they never forget that. That experience, along with countless others from their lives, stays with them for the rest of their life. It becomes them and changes them in a way we cannot begin to understand.

So when I say you have to wonder if Vonnegut has a point, he always does. He may take a roundabout way of getting there, but he does.
Posted by Allie at 10:29 AM