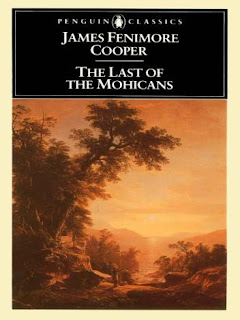 Well, Cooper is a tricky little man. I was all set to continue my hatred of him after reading that awful book, The Pioneers back in college. I mean, I went around and authoritatively said that I hated Cooper, based on that one horrid experience.

I guess I have to eat my words.

Its not that I loved The Last of the Mohicans because love is a strong word, and I would not compare how I felt about Zola's Germinal to this, but I rather liked Cooper's book.

I can't help it. A very large part of me had to give it up to Mr. Cooper. His novel accomplished quite a few things that some of our modern day writers can't. And even with its faults, I still came away rather liking it.

For one, I really do admire the character of Natty Bumppo. Now, I have heard that it is different in Hollywood's version, but in Cooper's work, Bumppo seems to portray a truly great Romantic hero. He is not chasing after the girls for his own gain, or pulling them from trouble to fulfill his heart's desire. Instead, he is sacrificing them for honor and for the simple fact that he doesn't want to see them fall into enemy hands and be harmed. There is no romantic entanglements between Bumppo and either girl. I like the he goes into battle risking his life for no other reason than to make another man (or men) happy. He does it because it is the right thing and not because he expects anything from it in the end.

THAT is what more modern writers need to learn. There are, in fact, good people who do things for others for the enjoyment and pleasure of bringing a smile to another's face. We are not all selfish beings who believe that we need to be "paid" in some way for doing a good deed. It is a moral and a belief that seems to have been disappearing....and I admired that Cooper portrayed a character that we can love wholeheartedly.

I also really loved Cora, the strong-willed and determined female. I was glad to see a strong female character in this work, since it is a rather early piece and well....most females are seen as simpering, whiny little things who constantly need protection from the men in their lives. And while Cora is rescued in a few parts, she has a lot of spirit and courage. Again, that made me admire Cooper.

Now, on the other hand, there was a whiny little girl named Alice who made me cringe. She needed looking after and portrayed that stereotypical image of a woman in distress. Unlike her sister Cora, she needed a strong man to save her. I found her to be rather annoying and I wasn't a fan of her romantic entanglements. In fact, I found them almost nauseating.

My other big issue was Cooper's interpretation and representation of the Native American tribes. I have to give him a little leeway, since we know far more about their traditions and beliefs than they did back then. We are far better educated and understanding of cultures other than our own, and Cooper's level of education on the matter really shows. It was hard, at points, to keep in mind that many, if not most of the people living in that time period, were frightened of the "savages" and didn't want to see them as human beings. It is just how it was and that shows in the novel.

That being said, I kept it in perspective and felt that given the time period, Cooper attempted to showcase them in a positive light. Whether it was a great job, well, I'll leave that up to you if you decide to read this.

In all, I thought that The Last of the Mohicans was wordy, long, and confusing, but it really pulled at a deep part of me. I can't say exactly why, but I feel as though I understand Cooper and where he was coming from in writing his Leatherstocking Tales. He truly wanted to capture the excitement and danger of young America in the wilderness. Perhaps in the future I will continue my journey with Natty Bumppo.
Posted by Allie at 9:26 PM

Email ThisBlogThis!Share to TwitterShare to FacebookShare to Pinterest
Labels: Finished, James Fenimore Cooper, The Last of the Mohicans