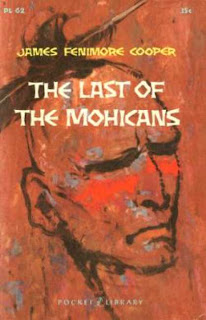 Back when I read The Adventures of Tom Sawyer by Mark Twain, I mentioned an essay Twain wrote about Mr. Cooper. The essay is called "Fenimore Cooper's Literary Offenses" and it is one of the most brilliant things I have ever read. I get the feeling that Cooper is to Twain what Dickens is to me (perhaps I need to write my own "offenses" about Mr. Dickens).

Anyway, in the essay Twain rips apart Cooper's writing, in much the same way I criticize Dickens. But he does it with great humor....and I laugh, a lot. Here is one of my favorite passages:

"Cooper's gift in the way of invention was not a rich endowment; but such as it was he liked to work it, he was pleased with the effects, and indeed he did some quite sweet things with it. In his little box of stage-properties he kept six or eight cunning devices, tricks, artifices for his savages and woodsmen to deceive and circumvent each other with, and he was never so happy as when he was working these innocent things and seeing them go. A favorite one was to make a moccasined person tread in the tracks of a moccasined enemy, and thus hide his own trail. Cooper wore out barrels and barrels of moccasins in working that trick. Another stage-property that he pulled out of his box pretty frequently was the broken twig. He prized his broken twig above all the rest of his effects, and worked it the hardest. It is a restful chapter in any book of his when somebody doesn't step on a dry twig and alarm all the reds and whites for two hundred yards around. Every time a Cooper person is in peril, and absolute silence is worth four dollars a minute, he is sure to step on a dry twig. There may be a hundred other handier things to step on, but that wouldn't satisfy Cooper. Cooper requires him to turn out and find a dry twig; and if he can't do it, go and borrow one. In fact, the Leatherstocking Series ought to have been called the Broken Twig Series."

Okay, I tried to just pick my favorite line, but couldn't, so you get the whole paragraph. The point that I am trying to make is that even these revered authors find fault in their peers. I love that, and I love that Twain rips Cooper a new one.

Anyway, back when I read my first Cooper novel, The Pioneers, back in college, my professor had us read this essay. A good friend of mine, Vicky, was also a huge Twain fan and has glorified this essay. And since I really did NOT enjoy The Pioneers, I assumed I would hate The Last of the Mohicans. After all, it is written by the same guy, and has some of the same characters. Not to mention, I LOVE Mark Twain, and how could he be wrong???

Well...I actually kind of like The Last of the Mohicans. I mean, it certainly has its problems. Alice is a whiny sort of girl that I find myself getting annoyed with. If we were stuck together in the woods I would be very reluctant to help out such a helpless and whiny person. I also have a hard time following who is talking and what they are trying to say at points. I think Cooper is trying to give the impression that Natty Bumppo is all-knowing and wise in his speech, but I find him confusing and long-winded. I also have some problems with the way all of the Native American peoples are portrayed, but that is a result of the time in which this was written. I can deal with that. My biggest peeve, however, is how Cooper will make a few chapters super exciting, and then NOTHING happens, and then something BIG happens and I keep flipping to find that eventually, nothing will happen again.

But even with all of that, I still like it. Granted, I'm not done yet, but this is a far more pleasant experience than I was expecting! I think this just reaffirms my belief that you have to give an author a fair chance before dismissing them (but I might be speaking too soon). Only time will tell.
Posted by Allie at 10:00 AM

Email ThisBlogThis!Share to TwitterShare to FacebookShare to Pinterest
Labels: James Fenimore Cooper, Mark Twain, The Last of the Mohicans, The Pioneers