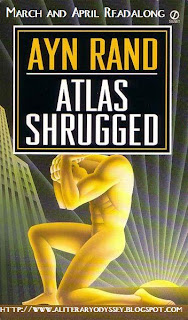 Welcome to the second post in our readalong of Ayn Rand's Atlas Shrugged here at A Literary Odyssey. If you missed it and want to go back, we posted our thoughts on the first part a few weeks back. Since that time, another blogger managed to finish the whole shebang, so be sure to look at Christina's post linked below.

As I get further into this one, the more I am realizing how there can be two feelings about this book. On one hand, Rand is infuriating in the fact she seems to shove her philosophy (Objectivism) down her readers' throats. I get that the story here is meant to be a platform for her to do so, but didn't she ever learn what will piss a reader off? I don't enjoy being told what I should or should not be thinking, and Rand has a way of making me more than a little grumpy.

The other school of thought, well, loves the book. I can see why. I can see how her philosophy is appealing (again, here is the link to the Wikipedia article. I cannot begin to explain it better). I can see why quite a few people fall in love with her philosophy and ideas about societal movement. I get it. And I think that if I had read this a few years ago, I would be sucked in as well. Now, in my old age, I don't buy into as easily (I'm joking about the old age, but there is a large maturity difference in a matter of years after high school and after college, know what I mean?). I see flaws in what she is saying and while I can honor her ideas, I don't necessarily believe them.

And I feel I should be perfectly honest and say that I am approaching this title with a lot of trepidation and skepticism. I went into this one prepared to hate it, wary of what Rand was going to preach to me, and sure that I would hate it. So it is hard for me to approach this like I do many of the other books I read. I know too much about and had I just read it without knowing anything about Rand, who knows what thoughts I would have.

Moving on from all of that and my unsure feelings, let's talk about the storyline and what has happened in this second portion of the book. There are most definitely spoilers if you haven't read the book.

Economies in different areas are beginning to collapse and the railroads are on the brink. Dagny and gang are slightly panicking as they try to keep the railroads open. In the midst of all of this, Reardan is indicted and once he refuses to cooperate at trial, he is let off with a fine. There is also a lot of bruhaha about Reardan being selective in who he sells his precious metal to, which causes the government to get involved, etc. Then a group of pirates steal the copper needed for the Reardan metal, which means Reardan can't fulfill his order to Dagny (OH THE SHAME), so she must close one of the lines of her railroad and use what she has to fix the main line (I sense disaster).

Jim Taggert, Dagny's wuss of a brother, starts freaking out and tries to get to the bottom of what is going on. He invites Reardan's wife over and she learns that Reardan's mistress is Dagny (DRAMA). Soon after, a directive is passed, ordering the economy to freeze. All businesses have to stay open and companies must turn over patents, etc to the government for control. Obviously Reardan is mad since he doesn't want his precious metal manufactured by anyone else. Someone attempts to blackmail Reardan and make his affair public and Reardan whines about not making his affair known and/or being done with his wife. There is some more drama with his wife and a mysterious man shows up to give Reardan a bar of gold...

Then a Taggert train is stalled and cannot move, so a new engine is attached that burns coal. Knowing it is dangerous, it goes through a tunnel and the toxic fumes kill everyone on board (stupid). When Dagny hears about it, she returns to work to fix the problem (going against the directive-eek!) and more drama happens. Men are in love with her and get rejected, etc, etc. Eventually Dagny finds her way on to a train where she (and we) finally learn about the mysterious John Galt. We learn he was a real person, the first to leave and walk off. He also said he would "stop the motor of the world" and Dagny's new quest is to find him.

Did you get all that? It was a lot and I attempted to simplify. Basically the economy is in chaos and people are freaking out. Capitalism seems to be failing and Dagny simply can't get a good man.

What I noticed most in this section was the high level of talk on the role of companies, big businesses, etc in the role of a government. Everyone in the book freaked out when the directive was passed and forced them to think outside of making money and being successful on their own. There was also a lot of drama surrounding Dagny and her relationships with the men around her. Even though Reardan is scuzzy, I still kind of like him (who knows why). I also still really like the character of Dagny. She is no nonsense and sassy, which is something I love.

Going into this third part, I am hoping for some answers. I want more information on the character of John Galt. I want to know how it all ends. And I want Rand to stop shoving philosophy at me in such an obvious way (every time she does this I throw the book down. My book is dented...a lot. I like to punish her for assuming I am stupid and can't read between the lines).

What I really hate about her writing is that she never acknowledges other feelings about what she has to say. She presents everything as if to say "this is how it is." For someone who believes something very different than what she does, I have a hard time with this. There are other viewpoints, beliefs, and ideas about the way the world should work. At least acknowledge that you might not have all the answers lady.

(On that same note, that exact writing style is probably why so many people can relate and love this story. By putting it all out there, Rand gives readers something to latch on to and believe in. I just don't necessarily buy it-many do).

More than anything, I want to be done and move on. This experience is rather draining and I am sick of being on my toes, know what I mean?

If you are participating, please leave a comment below so I may link it here. Visit other participants' blogs and comment away! We have one more chunk to go and that post will be up on April 30th.