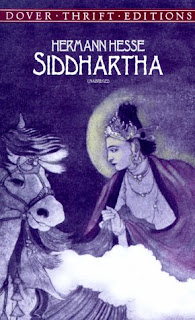 I am going to be honest from the beginning and say that I read this book nearly two months ago. And while I took notes and have some thoughts in draft form, this is probably going to be a much shorter post than usual.

The fact is, I have little to say about this one. I think a huge part of that is that I read this title at the wrong time. I read this during my little weekend read-a-thon and tried to force my way through it. I knew from the beginning that I wasn't feeling it, but continued anyway. Generally, I set aside books I am not feeling for later. I strongly believe that sometimes we need to be in the right frame of mind for certain things, so those titles get set aside for a little while. Other books I have set aside since starting my little project include The Red Badge of Courage, Ulysses, Lord Jim, and Catch-22.

I didn't go with my instinct on this one and plowed through it. I blame myself for not enjoying it and not pulling enough out of it.

Siddhartha is about a young man who seeks enlightenment. He travels with a friend in search of knowledge and truth and seems to lose himself slightly along the way. By the end of the tale, he finds where he is meant to be and reaches his own kind of nirvana.

The story is told in a lot of symbols that you, as the reader, have to interpret. It isn't straight forward or simple, which is why I am kicking myself for not waiting and taking my time with it. I did enjoy some of the language and I could appreciate some of it.

But I didn't connect with the characters or the story. I felt detached from what I was reading, which didn't allow me to fully experience the story like I should have.

I know that I will eventually reread this sometime in the future, and hopefully I will appreciate it a lot more the second time around.

Have you read this one? What did you think?
Posted by Allie at 2:12 PM