Thoughts on The Girl Who Was on Fire edited by Leah Wilson. 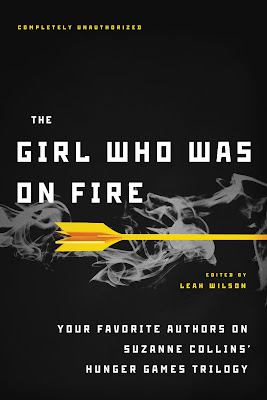 *If you haven't read The Hunger Games, Catching Fire, and Mockingjay, please don't read this post, as there will be spoilers*

I feel a lot of pressure to make my unit on The Hunger Games the best unit ever. There is so much that I can discuss with this book that I feel like I have to do it all! Last week, I asked you for some suggestions for the unit, and your comments were amazing. I am definitely mulling them all over as I plan out my unit. A couple of you suggested I read The Girl Who Was On Fire as a place to gather some ideas about the novel. I actually bought a copy at a Border's sale over the summer, so my copy was already on my nightstand as a resource.

I wasn't sure what to think going into this book. Basically, the book is a collection of essays by various authors on different aspects of the series. I was hoping to walk away with one or two essays to share with my class, but I ended up with a LOT of information about the series in general!

The essays were diverse enough to keep my attention the whole way through the collection. I thought I would be bored of reading about the series by the third essay, but I was surprised to find myself interested in each one. In particular, I thought I would hate the essays on the reality and fashion aspects of the series, since I started to dislike those sections so much in Mockingjay, but I was surprised that I really loved those two essays! Considering the fact that I am teaching The Hunger Games to high school juniors and seniors, I think those aspects of the book will really appeal to them. I already have a discussion planned around the ideas of reality, reality TV, and false appearances. I hope we can have great discussions about how Katniss and Peeta chose to act while "live" on camera. The essay "Smoke and Mirrors" really focused on those ideas, and since the first chunk of the essay stays true to just the first book, I am going to use that section in class.

One of my other favorite essays in the collection was the third, titled "Your Heart is a Weapon the Size of your Fist" by Mary Borsellino. This essay focused on the weapons in the series-those of the Capitol and District 13. But I also liked the idea that Katniss and a few others fight with emotion-with love. It reminded me a bit of Harry Potter in that love can conquer evil, you know? The author brings up what happens with Rue in The Hunger Games as a prime example:


"The effect of this tiny, humanizing act-singing to a dying child-has immediate and far reaching consequences," (34).

When I read that statement, I had to stop for a moment and think about that word choice-"child." While I obviously know that all of the tributes in the Games are children, there was something different about Rue, right? And the fact that Katniss holds on to her humanity and honors her death as a child, well, that IS powerful. Her choice to share her love has a profound impact on what happens afterward in the novel-Rue's district sending her bread, gaining other supplies from other districts and sponsors, and the choice she makes at the end of the novel with Peeta. Because rather than always resorting to violence, Katniss chooses another route. And it works. Because without that symbol of love towards Rue, would the districts have banded together to fight back? Who knows.

The one essay I wish I could share with my class but can't is "Bent, Shattered, and Mended" by Blythe Woolston. The essay focuses on the mental side effects of what happened to Katniss, Peeta, and others throughout the three books (since I don't want to spoil the second and third books, I can't use this one in class, but I will talk about the mental effects of the Games in general terms). I know that there are some who weren't happy with the ending in Mockingjay-that Katniss seemed to have lost her mind and that the ending was unsatisfying. As I said in my review,

"There is no way a young girl of 17 can handle the amount of death and destruction she sees..."

Woolston expands on this a great deal in her own essay, which is probably why I enjoyed it so much. The fact is, Katniss is a battered and bruised war veteran by the time Mockingjay comes to an end. And she is younger than those we allow to enlist in the U.S. Military! That should say something about her psyche! Because as tough and as strong as you think you are, I don't think anyone is prepared to kill another human being-especially in the circumstances Katniss was subjected to.

I am sure that this will be something we'll talk about in class-how Katniss must feel. There is that section in The Hunger Games where she talks about her first human kill, and I am sure that my class will have questions about it. I'm also hoping we'll talk a bit about Haymitch, since he is another example of the PTSD that all Hunger Games Champions seem to suffer from.

In all, I would say that this is a great collection of essays on the series. I was interested in all of them in some way, and I found a lot of interesting tidbits to use as discussion starters in my class. I am also looking forward to my own reading of the book with these ideas in mind. My only wish is that there was one essay without spoilers for the last two books, since I would love to expose these kids to a bit of criticism on a modern book. I will certainly let you all know how they feel about it!
Posted by Allie at 7:30 AM

Email ThisBlogThis!Share to TwitterShare to FacebookShare to Pinterest
Labels: Catching Fire, Essays, Finished, Mockingjay, Teaching, The Girl Who Was On Fire, The Hunger Games