Between Shades of Gray by Ruta Sepetys. 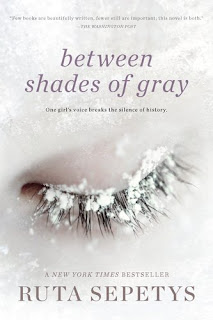 “Have you ever wondered what a human life is worth? That morning, my brother's was worth a pocket watch.”

One of the dream classes I would like to teach, if I was allowed to teach whatever I wanted, would be a war literature class. There is something incredibly powerful in the literature focused in periods of brutality and violence that really speaks to me. I also think that war literature is incredibly profound and moving-especially for high school students. Many of my students haven't faced that kind of hardship and loss (Not all, but many), so it would be a great learning experience for them.

And among the piles of books I would love to include in this class (titles like The Book Thief, The Things They Carried, Maus, All Quiet on the Western Front, 1776, Slaughterhouse-Five, Night, Birdsong, Johnny Got His Gun, The Diary of Anne Frank, and more...), I would include this new release by Ruta Sepetys.

I bought this at the bidding of our media specialist during the second week of school at our school book fair. She told me she had heard wonderful things about it and thought that I might like it. So, I bought it, brought it home, and there it sat for a number of weeks until I was feeling restless one Friday evening. Home alone and needing a new book to read, I pulled it out of the pile, snuggled in bed, and began reading.

Two hours later, I closed the back cover with a huge lump in my throat. This book...it wasn't what I expected. I was moved, immediately, by the passion and power of Lina's story. What happened to her and her family...I've never read about it before-not in high school and not in any of my college history classes. I never realized that people of her descent (Lithuanian) were sent away during WWII-to Siberia of all places-and by Stalin. We are so often consumed by the disgusting nature of Hitler and the Nazis that we forget the other dictator of the time. Lina's struggle to survive was so similar to what happened to the Jewish people during the Holocaust (both were sent to camps, shot down, starved, forced into labor, etc), and I was simply blown away.

And it wasn't that this was just another book about the horrors and atrocities of WWII. I mean, I'm sure we've all read the stories of the camp survivors. We talk about it often in history classes so that we don't forget, but it is the stories like these, those that are less heard, that truly strike a chord.

But what really makes this book powerful is the honesty and raw nature of the writing. As a young adult novel tackling some harsh and brutal themes, Sepetys does a masterful job of bringing humanity and life to a dark story. It was beautiful and moved me that night I read it.

“November 20. Andrius's birthday. I had counted the days carefully. I wished him a happy birthday when I woke and thought about him while hauling logs during the day. At night, I sat by the light of the stove, reading Dombey and Son. Krasivaya. I still hadn't found the word. Maybe I'd find it if I jumped ahead. I flipped through some of the pages. A marking caught my eye. I leafed backward. Something was written in pencil in the margin of 278.
Hello, Lina. You've gotten to page 278. That's pretty good!
I gasped, then pretened I was engrossed in the book. I looked at Andrius's handwritting. I ran my finger over this elongated letters in my name. Were there more? I knew I should read onward. I couldn't wait. I turned though the pages carefully, scanning the margins.
Page 300:
Are you really on page 300 or are you skipping ahead now?
I had to stifle my laughter.
Page 322:
Dombey and Son is boring. Admit it.
Page 364:
I'm thinking of you.
Page 412:
Are you maybe thinking of me?
I closed my eyes.
Yes, I'm thinking of you. Happy birthday, Andrius.”

Since reading this (nearly a month ago), I have been trying to persuade some students to give it a chance. Many of them refuse, saying that books about war are boring and "unimportant." Their attitudes are the reason I want to teach war literature-to show that there is beauty in war, and to honor those who have fallen.

"...says that evil will rule until good men or women choose to act. I believe him. This testimony was written to create an absolute record, to speak in a world where our voices have been extinguished. These writing may shock or horrify you, but that is not my intention. It is my greatest hope that the pages in this jar stir your deepest well of human compassion. I hope they prompt you to do something, to tell someone. Only then can we ensure that this kind of evil is never allowed to repeat itself.”
Posted by Allie at 7:00 AM

Email ThisBlogThis!Share to TwitterShare to FacebookShare to Pinterest
Labels: Between Shades of Gray, Ruta Sepetys, War, World War II, YA