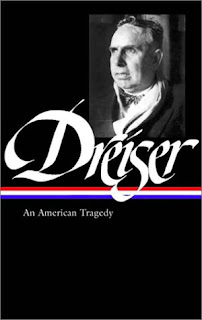 This book is massive. I feel like I could actually knock myself out with it. It is a heavy brick that I have been lugging around, and it reads like a heavy brick in parts.

I have completed the first, and shortest, part of 146 pages. Finishing that felt like reading a whole book. It almost made me cry when I realized that not only do I have two more parts to read, but I also have over 700 pages LEFT. Yes, this is massive.

With that being said, I actually really like Dreiser's writing, and this interesting story. The novel is based on a real murder and Dreiser explores in this behemoth how a man could be driven to such murder. From how I am understanding it, the first part explores some of the main character's background (I'll touch on that more in a minute). The second part is on his relationship with the woman he ultimately murders (not a plot spoiler, promise. You know he's going to do it just from reading the back over). And the third part is the aftermath-the trial, etc.

And I like that little play on words in the title. Instead of "dream," it is a tragedy, since Clyde doesn't seem to always get what he wants. In the first part where the novel explores his youth, we gain a lot of background information on him and his family. I don't exactly see how this is necessary in detail, but I can understand why Dreiser spends the time to paint a vivid picture of Clyde.

Growing up, Clyde moved around a great deal as his parents were street-preachers and often worked in missions. At the time the novel begins, they have settled in Kansas City and Clyde really hates his life. He wants more than what his parents can offer him and dreams of something more. He ends up working at a soda fountain before being employed as a bellboy at a ritzy hotel.

This is where the picture of Clyde really begins to develop. He lies to his parents about his wages so he can keep more for himself to buy nice clothes and go out with his friends. He makes up excuses to be with different girls and friends. He yearns for a life that is a lot grander than what he has and attempts to get there by any means possible.

It is an interesting depiction of how the class system in the United States works. We all have that "American dream" of reaching far above and hoping to move up. And it is entirely possible for almost anyone to do so. But you have to wonder, as I did reading Clyde's story, is it actually worth it? Because, judging by the title, I don't think Clyde is going to get his dream.

Anyway, this first comes to a shocking end as Clyde seems to be in the wrong place at the wrong time. I am curious to see how the massive middle section bridges this early portrait of a young man with lofty goals into a murderer.
Posted by Allie at 11:12 AM