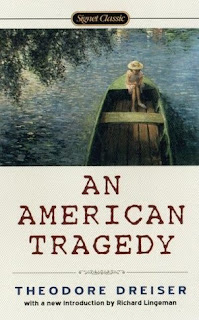 Dreiser is definitely a mouthy sort of fellow. I mean, he likes to take his sweet time saying what he needs to say, and kind of rambles in a long and complicated way, repeating the same idea that he mentioned in the last chapter. But it works for him, I guess, since I'm still reading and I finished the second of three parts in this massive tome.

At 370 pages long, the second part is more than double the length of the first part, and only slightly more exciting. At the end of the first part, Clyde escapes Kansas City after an accident of sorts. We find him at the beginning of the second part working in a hotel in Chicago. By chance, he runs into his wealthy uncle (his father's brother). Clyde impresses his uncle and manages to land a job in his uncle's factory. Clyde believes this to be his saving grace and his way to finally move upwards in society.

He moves and begins work. His uncle and family seem to ignore Clyde-mostly likely because they are embarrassed by Clyde's humble status and his family. However, Clyde works hard and is eventually promoted to working in a room where he supervises a group of young girls. His one rule is not to get involved with any of the women in his room.

I'll give you one guess what he does.

Roberta is a beautiful girl from a very poor family. She is living with a friend in town and seems slightly naive. Clyde and her begin an affair. While she is loving and willing to commit to Clyde, he is more fickle. At first, everything seems fine. He falls in love with Roberta and she with him. They see each other in secret so that no one will catch them and report him to his boss. He even convinces her to get a new place to stay so he can go to her room at night (scandal!).

Then, he is scooped up by society. A group of young men and women who are in the elite in town realize who he is related to and start taking him around. Clyde goes to dinners and parties and gradually leaves Roberta behind. He falls for another girl and rather than being honest with Roberta about his feelings...he just lies to her. It all comes to a head when she realizes she is pregnant.

This is where the novel really began to grab hold of me. On one hand, you have a young, innocent girl who didn't ask to be knocked up, and knew better. Clyde pressured her and promised her marriage. She wants him to help her and cannot understand why he won't.

Clyde, on the other hand, has always wanted money and society standing. This is his opportunity to make something of himself and become more than his parents. He fell out of love with Roberta, which happens, and doesn't know what to do. If he marries Roberta, everything he has worked for will disappear. If he continues to ignore her, then she'll take action.

It is certainly a sticky situation and it was hard to decide where to lay my empathy. I mean, Roberta is a sweet girl, who knew better and let a man's "needs" take over. But I do feel for Clyde and now I understand why Dreiser took his time developing who Clyde was and where he came from. You, as a reader, have to sympathize with him a bit, since he is struggling, and trying. But, at the same time, Clyde is infuriating. You want to shake him, or at least smack some sense in him for making such stupid mistakes.

Then, the book takes this dark and twisted turn into the crime and Clyde's decision to "take care of" the problem by murdering Roberta (again, not a spoiler-it says it on the back cover). You have to wonder about the desperation that must have taken hold of Clyde when he made that decision. The last 30 pages of this section flew by to that inevitable climax when Clyde throws away his life...as well as Roberta's.

The third section looks like it is going to focus on the aftermath, and I am sure that once I finish it I will have more to say about the drama of Clyde Griffiths. I only hope it moves along faster than the first two parts.

Someone really needed to edit this monster before publication. 100 pages of courting Roberta was not necessary to establish their relationship, you know?