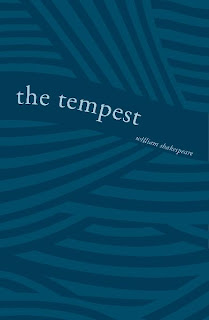 On August 16, I posted my thoughts on the first two acts of William Shakespeare's The Tempest. You can find them here.

I will sadly say that I set the play aside for a bit as I went on a reading craze and when it came time to go back to it, I had to reread what I had finished to refresh my memory. Thankfully the play was easy to fly through and I finished the entire play the other night.

As the first Shakespeare play that I was reading by myself (all the others I have read for this project were rereads of plays I had read in high school and college), I was surprised at how easy it was for me to decipher things. Perhaps it was because of my previous experiences with Shakespeare as a writer, or I am just getting better at understanding more complicated language, but I did not struggle too badly.

With all of that being said, I absolutely adored the play and it is probably one of my favorites (behind Much Ado about Nothing and Macbeth). The character of Ariel, in particular, I developed quite a fondness for, and I was loving the amount of action and intrigue in the play.

I also really loved the relationship that developed between Miranda and Ferdinand. Even though they only knew each other for a few hoursish, they seemed to have a more realistic relationship than say...Romeo and Juliet. Anyway, here is a passage I want to talk about:

"Miranda:
'If you'll sit down,
I'll bear your logs the while. Pray, give me that;
I'll carry it to the pile.

Ferdinand:
No, precious creature;
I had rather crack my sinews, break my back,
Than you should such dishonor undergo
While I sit lazy by,'" (III.i.22-28).

I love this exchange. It is full of the courtesy and chivalry that should be evident in the beginning stages of love, don't you think?

But Ariel...what an interesting character. Trapped until Prospero freed him, he is not a servant to Prospero and spends most of the play doing his bidding. I could feel the unfairness of Ariel's situation. Prospero and Miranda are abandoned on the island and while Prospero has power, there is nothing he can do to free them. Ariel is finally free and probably believed that a man had finally come to free him, but rather than be granted the freedom that Prospero also desires, he is no better than a slave. It is an interesting contradiction and I was happy when Ariel was freed at the end.

Overall, it was a play I rather enjoyed. It was a little darker than his comedies, and certainly wasn't a tragedy. It was a play that I could imagine was received in awe, given the effects needed to carry out Prospero's magic. It is definitely a play I would love to see live and learn more about.

If you participated, leave your thoughts, or a link to your site so I can come and visit!
Posted by Allie at 3:30 PM