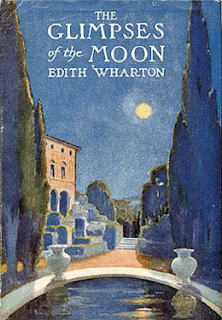 In my earlier post on Wharton's The Glimpses of the Moon, I talked about how I really do love and admire Wharton's writing. She always manages to capture my heart in a way that many other writers can't. And while this is certainly not my favorite Wharton (again, that honor goes to The House of Mirth), I enjoyed this novel on its second reading far more than I did on the first.

I think a large part of why I enjoyed it so much more is that I have gained a little life perspective since my first reading a couple of years ago. In the novel, Nick and Susy are on the fringes of society. Both of them do not come from money, but have wealthy friends who aid them along. Both Nick and Susy benefit from these friends. Susy is given old dresses from a season or two prior, and gets to go along on trips and excursions without paying anything. Nick attends dinners and trips with men.

Their paths cross again and again before they come to a decision to marry. Their marriage will bring them both benefits. As a pair, they will be invited to the "couples" events. Their two-year honeymoon can be spent traveling from vacation home to vacation home of their friends and reaping the benefits. This is how the novel begins.

It is clear from the beginning that Nick and Susy are meant for each other. They understand one another and care for each other, but make a pact that if anything better comes along, they will let the other go. Obviously, fate intervenes in their happiness and they part for a time.

Where do I fit into all of this? Since the first time I have read it, I have gotten married. And while Matt and I were dating and together for 7 1/2 years before we were married, since being with him and living with him, I have learned far more about him and his personality. And where we are not in a position like Nick and Susy, I can understand the trials and missteps that you can take in your first months and year of marriage. That is where the similarities end, but I can understand the anger and frustration of Nick, Susy, and their lack of fortune.

Don't we all wish we had just a little more to be comfortable?

I suppose the main reason I fell a little more in love with this novel is the whole idea that sometimes what you believe you want is not what you need, or what is best for you. At a certain point, Nick and Susy break apart (not really a spoiler, I promise). Both of them want "something" to be "better" and "accepted." But is that really what is needed?

I am at a point in my own life where I am approaching the third year after I have graduated with my teaching certificate, and still no job. At this point in my life I have to tell myself, "I want a teaching job, but is it really what I am meant to do?" Wharton's work simply reiterated that and helped me see (even further than what I have), that perhaps I am not "supposed" to be teaching and that the answer may already be in front of me.

It seems a rather deep interpretation of a novel based on society and Wharton's personal dislike for that kind of monetary status, but it is what I pulled from these wonderful 250 pages of Wharton awesomeness.

I leave you now with a small taste;

"The idea that he might be in the same place with her at that very moment, and without her knowing it, was so strange and painful that she felt a violent revolt of all her strong and joy-loving youth. Why should she go on suffering so unbearably, so abjectly, so miserably? If only she could see him, hear his voice, even hear him say again such cruel and humiliating words as he had spoken on that dreadful day in Venice when that would be better than this blankness, this utter and final exclusion from his life! He had been cruel to her, unimaginably cruel: hard, arrogant, unjust; and had been so, perhaps, deliberately, because he already wanted to be free. But she was ready to face even that possibility, to humble herself still farther than he had humbled her--she was ready to do anything, if only she might see him once again," (224).
Posted by Allie at 9:00 AM

Email ThisBlogThis!Share to TwitterShare to FacebookShare to Pinterest
Labels: Edith Wharton, Favorite Passages, Finished, The Glimpses of the Moon