Book 57: The Catcher in the Rye and Book Stats. 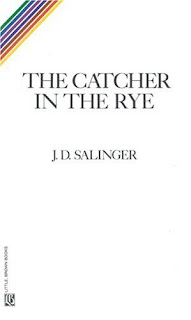 This is another re-read for me. Salinger's novel was required reading as part of my high school's eleventh grade curriculum. Had I not read it then, I doubt I ever would have. Just knowing what it is about wouldn't have appealed to me then.

But I am glad we read it. As a high schooler, I really loved the angsty Holden Caufield. I related to him and found a lot of similarities between how he viewed the world and how I viewed it. However, I was one of a few students in my class that liked the novel when we finished it. A lot of my classmates found Holden to be whiny and annoying.

I have heard that when people who loved this novel as a teenager re-read it at an older age, they hate it. I hope that doesn't happen, since I have always considered this one of my "favorites."

In any case, I am looking forward to my second dabble into Salinger. I own a copy of Franny and Zooey, but haven't read it.
Posted by Allie at 11:33 AM

Email ThisBlogThis!Share to TwitterShare to FacebookShare to Pinterest
Labels: Book Stats, Franny and Zooey, J.D. Salinger, The Catcher in the Rye