I have been participating in this monstrous read-a-long hosted by Amanda at The Zen Leaf of Charles Dicken's Bleak House.

If you have been following for a good amount of time, you should know one thing about my reading habits: I HATE Charles Dickens. I mean, I haven't had a positive experience with his writing ever and the only reason I have him on my list is that well, I can't say I've read a lot of classics if he's NOT on there. Many people associate Dickens with classics, so I feel this huge need to give him a try.

The read-a-long was the perfect opportunity to get this mammoth novel out of the way. My own edition was 818 pages.

I only managed to be on time with my first post, but I finished this monstrosity just in time to post my final thoughts on it.

I should say from the beginning that I was not impressed with the structure and style of the novel as a whole. Large portions are narrated by the heroine-Esther, but random chapters are told from an omniscient narrator. This left me feeling confused. Had Dickens only told the novel from one point of view or the other, I may have had an easier time reading it. Also, Dickens threw in so many sub-plots and characters that I had difficulty keeping track of who was who and what exactly was going on. Taking Amanda's lead, I began reading the Sparknotes before reading the sections to help understand just what was going on.

These were my two biggest issues. I can understand that Dickens released this serially. I can give him props for developing such a massive story that was so incredibly detailed. And, in the end, it seemed to work out. But this is where I have to wonder, how many of those sub-plots, twists and turns were really needed? Dickens was obviously paid for larger and more intricate pieces. So....how much of it was simply padding? 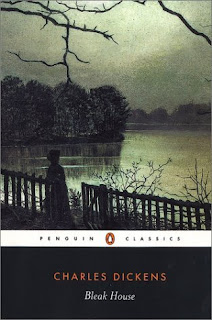 This was my big problem with Great Expectations last fall. The basic story was good. It was the middle part that dragged on and on and on. I liked the story with Magwitch and Pip. It was the ramblings in the middle that I thought were unnecessary.

So, those were my problems. But now you're asking: what is this story all about?

Bleak House is a complicated novel. At the core is a court case (Jarndyce v. Jarndyce) that holds the fate of all in its clutches. It has moved through the courts slowly and has been a huge expense. Obviously, Dickens was commenting on the structure of the British legal system, but much of this was so intertwined with everything else I didn't pay great attention to it. It had a lot to do with wills, inheritances, and the like.

Esther is an orphan (supposedly) and when her guardian passes away, she is taken in by a proprietor, sent to school for six years, and eventually finds a place in his home with his two other wards, Ada and Richard. The three of them are close and eventually Richard and Ada fall in love. While Richard wants to push the court case through to get his hands on what is due to him, their guardian, John Jarndyce, hopes that Richard will choose a profession to support himself and Ada.

There is also the story of Esther's mother, who is not dead and does not know that Esther still lives. Another side plot involving her search for Esther's father (not her husband??) and her discovery of Esther also unfolds.

In all, I liked the idea of Bleak House, but I didn't like the product. There are certain cases where length is needed. And here, I felt that there were large portions that were just excess. I was frustrated by my own inability to follow the story between sections and chapters as the narrator changed and the plot focus constantly switched. Honestly, Dickens needed an editor to tell him to focus his novel on the story of Esther and her role. If she was the narrator he picked, then well, he needed to stick to telling her story.

Anyway, I am glad I can mark another Dickens novel off my list. It was the biggest, so I am glad its over with. I have five more Dickens novels to go. I can only hope that they are not as painful.
Posted by Allie at 9:22 PM