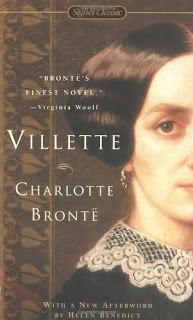 I should say right off the bat that I haven't read Jane Eyre, and until this point the only other Bronte work I have read is Wuthering Heights. I chose to read this title first for a couple of reasons.

First, I have a definite feeling that I will really love Jane Eyre and so I wanted to "save it" until near the end of my challenge. Second, I don't want this novel to pale in comparison. I have heard mixed things about Villette, so I want to generate my own thoughts.

If Charlotte is anything like Emily, I know I will enjoy this. But, I have also heard that in some ways she is a little more talented than Emily, so who knows. I don't know a great deal about the Brontes, truth be told, but the little I do know is fascinating. Poor Anne is not on my list, but eventually I will have to give her a try as well.

In any case, its time to read another heavyweight and get another title ticked off!
Posted by Allie at 11:19 AM