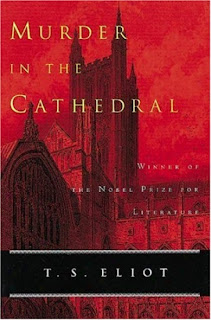 "The last act is the greatest treason,
To do the right deed for the wrong reason."

I really enjoy a lot of Eliot's poetry, and was blown away by "The Waste Land" when I read it a year or two ago. I have been meaning to read Murder in the Cathedral since I received it from my Blogger Secret Santa in December, and I finally got the opportunity a week or so ago.

I'm not sure what I was expecting. I knew that Murder in the Cathedral was a play, but I didn't know what it was about. It actually took me two reads to get a general idea of what the play was even talking about.

Basically, the play is focused on Archbishop Thomas Becket, and focuses on his decisions and actions right before he is murdered and becomes a martyr. There is obviously a lot more history to it than that, which I am not 100% confident in discussing (it would make me sound like an idiot, trying to piece it all together).


In the first part of the play, Becket is determining which stance to take-to stay true to his own beliefs even if he knows he may pay for it, or to do what others want him to and sacrifice his own good faith in himself. The first half is his mutterings, as well as the temptations by his tempters-those who wish for him to make the decision other than what he is comfortable with.


The second part is of his death. Four knights come to murder him. They all give big long speeches on why, and the event takes place off the page.


In the midst of these two chunks the chorus speaks...and tells the audience to "stay awake" among other things.


The whole thing was a little confusing, the language heavy, and I was left completely unsure of what was going on. Thus, the second read. It started to make a little more sense, and I pulled out some other pieces to put together what I've just shared with you.


I was really intrigued by the lines I shared above-the whole idea of standing up for what is right when you know that bad things will happen to you if you do. I think we have all thought of making that kind of stance at some point in our lives-sticking up for what is right in light of being the only one on that side. Or, of only doing the right thing, but to make some kind of gain in the process. I always wonder about the choices I would make if I were to be in that position. I hope I would make the right and honest choice, but you never know what will happen in times of stress, you know?


Anyway, this is another of those plays that I think I would understand more seeing it performed. Perhaps sometime in the future I'll have that opportunity.