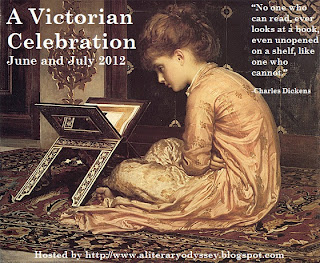 I've already had a lot of people sign up for my Victorian Celebration taking place this June and July. If you still want to join in, there is plenty of time to state your intentions! Just click on that link and it'll take you to the sign-up post.

The event is going to start in about a month, and I could not be more excited. I have lots of great things planned, and some fun events for during the event.

Anyway, to kick off the excitement, I have some prizes for those of you who signed up early!

If you recall, in signing up by May 1, you were entered to win a beautiful Penguin clothbound of your choice from the following list:
Originally I was going to give away 1 book, but I have 3 lucky winners. If your name is below, congratulations! You'll see an e-mail in your inbox in the very near future with the information needed so I can send your book on its way.

Thank you all for signing up! Keep spreading the word about the event, and get SUPER excited about June and July! I know I am!
Posted by Allie at 7:24 PM

Email ThisBlogThis!Share to TwitterShare to FacebookShare to Pinterest
Labels: A Victorian Celebration