An Uncommon Education by Elizabeth Percer. 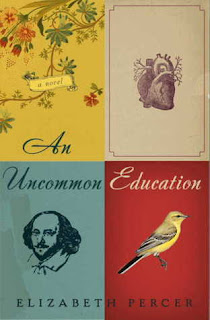 "'It's like this, Naomi,' he said, settling down next to me. He was unshaven and wore a tattered sweatshirt. There was some chocolate smudged just outside his mouth, and his eyes were bright with excitement. 'It can be dangerous to look forward too much, to think always of what should be instead of accepting what is'" (30).

I rarely accept books for review, but when I was offered a copy of An Uncommon Education by Elizabeth Percer, I was intrigued by the synopsis. I love the idea of coming-of-age stories. And I love that they aren't just limited to certain time periods in our lives, but across our entire life. Because really, I'm coming of age throughout my entire life, right?

In any case, I was anxious to get to this one, and I picked it off my pile as soon as I could. I wasn't disappointed.

Naomi is the only child to two parents that struggle with their own identities and relationships. Her father is a loving a caring man, taking Naomi with him on trips as often as he can, allowing her the freedom to choose her future, and being a support to her whenever he needs to be. Naomi's mother is a little more distant from her daughter. She battles chronic depression and her role as a wife and mother. She converted to Judaism and seems isolated from the person she once was.

Naomi grows up in a house where her mental capabilities are cherished and with the loving support of her parents, she is allowed the opportunity to do whatever it is she wishes to. She is gifted and talented and after her father has a heart attack, her deepest wish is to be a doctor, so that she can take care of him in the future.

She eventually finds her way to Wellesley College, where after being isolated for a year, she joins the Shakes, a society for women like herself. It is only after she is a part of their group that she begins to learn who she is and what she is made of. She slowly goes through this transformation while at school, and as life events begin to spiral away from her, she learns who she really is and what really matters.

Naomi was a character I was drawn to. She was so isolated in her childhood. She focused so completely on her family, her friend Teddy, and the knowledge she gained from books. She has this intense focus from childhood on who she will become and what she is supposed to do with her life.

Perhaps that is why I was so drawn to her. Like Naomi, I have been a bit one-sighted in my ambitions. Whereas she wanted to be a doctor, to help her father, I have always seen myself in education. And like Naomi, other opportunities have presented themselves to me, and perhaps my path isn't as clear as I would like it to be.

Watching Naomi struggle with her identity and her chosen path just showed me that even though you may want something, even though you may think something is what you want to become, it may not be what you need. One of the biggest things I have learned in my struggle is that there is a large difference between wanting and needing. Sometimes there are things out of reach...and for a purpose. We can't control that, and while we might fight it, we shouldn't.

I was touched by the simple beauty of Percer's writing. She drew me in slowly, showed me who Naomi was, and allowed me to acknowledge who Naomi was supposed to become. So when Naomi disintegrates, because she doesn't know who she really is, I sometimes wanted to yell at her and say, "Why are you screwing this all up?" But, by the end, everything was at it should be, and Naomi seemed to have found peace with who she really was and what she was meant to be. Her story was an inspiring journey, and one that moved me immensely.

It was a lovely book, and I am so glad I had the opportunity to read it when I did. I've said it before-books have a time and a place, and sometimes, they just strike you in the right moment when you need them most.

This was one of those books.

*I received this book for review from HarperCollins.
Posted by Allie at 10:00 AM