I am in a really good place this week. I'm feeling like I am caught up with work and that I have some free time available! I was really behind on grading for a few weeks. I usually try to get things back to the kids within a day or two of collecting an assignment (except for essays. Those take a week or two). But somehow, I was WAY off. I blame trying to get a unit planned, etc for eating up my prep time. This past week, I was determined to get caught up. And catch up I did. The only things I brought home this weekend were an assignment I collected on Friday and the essays from my sophomores. That's an accomplishment! And I have vowed not to fall behind again!

I've also been working a few shifts at the park the last few weeks. I started back near the beginning of April, and spend both my weekend days there. It has been pretty low-key so far, as we don't get busy until June. But we've been working hard on finishing some maintenance issues, as well as prepping the trails for a busy season of 5K races, mountain bike races, and for our hikers and dog-walkers. We've also been training our new employees as they come back from college. Yesterday was especially exciting since we had some of our returners start up again.

I really enjoy my time at the park. While sometimes it can get crazy busy, there is always something new going on. That's what I love about the job, even though it can drive me nuts sometimes!

I've acquired quite a few books in recent weeks. A couple of lovely students chipped in to get me a generous gift card to Barnes and Noble last week (for Teacher Appreciation Week), so I went and bought some new releases I've been meaning to get to. I also picked up a few other things. To be honest, I really haven't bought much this year in an effort to keep my book acquisitions in line, but sometimes I go a little nuts. :) 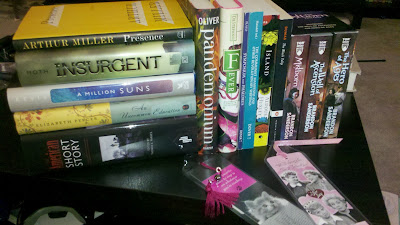 From top to bottom, left to right:
There might be a couple more I've acquired in recent months, but I'm not positive!

And you would think, that with all those books I would be a reading fiend, and while I have been reading, I've been feeling pretty fickle towards the books on my shelves. I've been grabbing random titles off the shelf, reading 30-50 pages, then setting them aside in order to get to something else. It is starting to get out of control! I am currently in the middle of the following:
See how it's getting to be a problem? I know I should probably focus on a couple of these until they're finished, but I'm having a hard time concentrating on any one thing. I have never done this before, so I'm feeling a little stressed out about the books piled everywhere (it's also making Matt get a bit twitchy). My norm is to read a book or two at a time. I like to focus on one thing until I'm finished with it (I can hyper-focus like whoa), but I seem to be lacking that skill recently....

I know some of you do this...tell me, how do you balance reading so much at once? And for those of you who don't do this, what should I finish first?

Happy Reading everyone!
Posted by Allie at 7:30 AM