Welcome to the fifth and final post for the Warbreaker readalong as hosted by Amanda and Naithin. I really enjoyed this group read-the weekly questions kept it interesting and the novel was AWESOME. :)

You can see my thoughts on parts 1-4 in these lovely locations:

There will most definitely be spoilers below, but I plan on putting up a spoiler-free review in the near future.

1. There were a whole bunch of character revelations in this last section of the book. We now know who Warbreaker is, and what Blushweaver's motivations are, and who was behind the war, and the intentions of several characters we suspected. How do you feel, now that everything's out in the open? 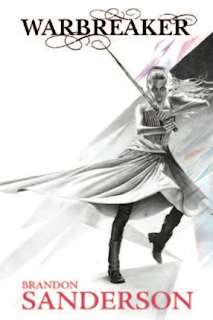 While I didn't enjoy the revelation of what Denth and crew were up to in the last section we read, I rather enjoyed the twists and turns that the final chapters brought. I was particularly struck by the choices Lightsong made in the end, especially as he acknowledged who and what he was (more on that below). I was also struck by Blushweaver and her true intention for maintaining control of the Lifeless. It was certainly interesting.

To be honest, I really didn't think that Vasher would be Warbreaker. I kind of hoped that one of the female leads-Vivenna or Siri-would gain that role. But, I'm okay with Vasher and his turn around...it was a bit of redemption, you know?

I also enjoyed learning a bit more about the priests and what they were really fighting for. I think I said in an earlier post that they were up to something other than what they portrayed. I also knew that there was a reason the God King was kept in the dark, so I'm glad all those questions were answered in this final section.

I had to go back to read what I wrote, but I don't think my true opinions have really changed. Lightsong was right to question his divinity. For me, when I think of gods (modern and ancient and everything in between) I like to think that they are free from fault and questions about their own purpose. The Returned showed too much uncertainty in their decisions about going to war to be that kind of...exalted presence I expect of my own God...know what I mean?

But Lightsong really had an impact on me in the ending chapters. Once he realizes what he is and who he once was, he seems to lose faith. It is only when he is given the choice to wallow in pity, or save the God King and sacrifice himself that I think he realizes the true nature of his own divinity. I think he realized that he had a choice in who he wanted to be in this second life. And while he already gave his life once, he could do it again for a real and significant purpose. I was just...struck by that. And happy that Lightsong made that choice. It was honorable, you know?

Anyway, I do think that the Returned have the capability of being divine, but not all of them are truly gods, in that they sacrifice themselves wholly for the people who worship them. I mean, really, did they listen to the people of the city and their struggles while they were quarreling about war? I don't think so.

3. Now that we've seen Nightblood in action, firsthand, and know more about its history, what do you think about it as an object? What are your thoughts about Vasher's relationship with the sword? 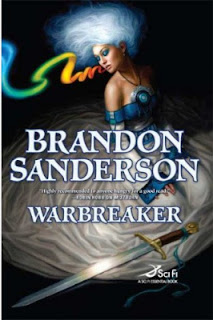 It's an interesting relationship, isn't it? Vasher said he kept the sword to keep it away from others, but I like to think that he kept it for his own sake. Since Vasher is more than what he appears, he needed someone to talk to and the sword fit that. It understood who Vasher really was and had the ability to protect Vasher when Vasher needed it most.

4. Lastly, what are your final thoughts on Warbreaker? How did it compare to other books you've read, and to other Sanderson, if you've read more by him?

The only other Sanderson I've read is Mistborn, which I absolutely loved, so I have little of Sanderson's work to compare this to. I will say that I enjoyed it. It was a fun story and while some of the little twists didn't quite fit for me with the storyline, I will say that I think Sanderson is a gifted writer. I'm definitely going to look into more of his books (after I finish the Mistborn readalong).

This title was definitely a decent fantasy novel. Like I said, there were little things that irked me. I think a large part of it was how the novel was originally written (serially on his website). That kind of writing, while thrilling for fans, doesn't allow for the writer to really revise and make significant changes. I think there were pieces that needed more clarification, etc.

But overall, good fantasy novel that is an entertaining and fast read!

Thanks for the great group read!
Posted by Allie at 7:00 AM