The Complete Maus by Art Spiegelman. 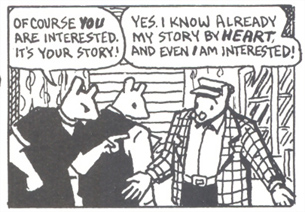 About a month into the school year, I was talking to our media specialist about wanting to some fun and creative projects with my U.S. history classes. So, in the midst of discussing slang dictionaries for the 1920s, a Great Depression simulation I have, and various web related ideas, she said, "Why not teach that book Maus?"

She had never read it (but knew quite a bit about it), and it had been years since I had read it, so I decided to pick up a copy, read it, and then decide whether it was something worth pursuing. After all, teaching a book in a history class? Teaching a graphic novel? It was something to think about. 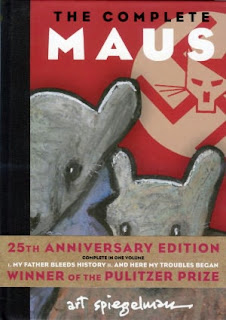 I went out and bought a copy of The Complete Maus, so I would have volumes 1 and 2. I sat down, read both straight through, and decided I needed to pursue the opportunity. To make the story shorter, I approached my principal, told him why I thought it would be a good idea, and he okayed it. The school purchased 36 copies of Maus Volume I, and I will be teaching it in late January.

As I sat down and reread the book, I was blown away by the story and the imagery. First, the story. I think that any story of a Holocaust survivor is mind-boggling. I am sure that I am not alone in saying that I honor and respect the people who were sent to Concentration camps and survived. If I am being perfectly honest with myself, I don't think I would be that strong, that resilient. I would be the person who gave up on the train heading to the camps.

But there is something incredibly moving about this story in particular. I think the juxtaposition between the "present" and the "past" of the story pulls at my heartstrings just a bit more. From the beginning, we know who survives and who doesn't, and that Vladek has lived to an age where telling his story is both painful and liberating. I actually think that the passages in the "present," where Art is trying to record his father's story, say far more about the effects of the Holocaust than the text related to Vladek's story. And I don't say that to diminish the power or struggle of what Vladek went through, but to say that this is more than a story about surviving the Holocaust-it is about a man surviving his memories. 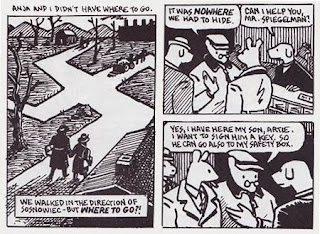 I also love the imagery in the book, like the picture at left. I think that taking the time to pour over the pictures says a lot about Art Spiegelman's skill. Each image is crafted carefully and shows the heart he put into his father's story. Because in addition to hearing the story and helping Vladek come to terms with his own experiences, the story is also about Art accepting his father and they way he is. The constant bickering about money, saving, and keeping memories is something I know I am going to discuss with my students at length.

I think that I am very lucky-to be in a school that is supporting something "outside the box." I am excited and anxious to share this experience with my students. To read a book in history class. To read a graphic novel, a form of literature that is sometimes looked down on. But I have a strong feeling my students are going to be excited and moved by the story, much like I was.

And if you haven't read Maus, you need to. It is a book (books, really) that you can't be whole without. I think I learned far more about the effects of the Holocaust from this than all my years of schooling. 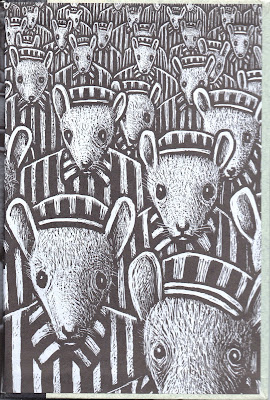