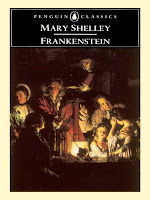 Apparently I am a bad blogger. See, I thought I had this post already written and up, but when I actually went and looked, lo and behold I was mistaken.

I finished Frankenstein on Wednesday and I never wrote about it! Bad, bad Allie.

So, here I am, writing the post I thought I had already written.

I just wanted it in words officially: I loved Frankenstein. No, amend that: I LOVED FRANKENSTEIN. I honestly don’t know why I never gave it a chance earlier. I think I had some preconceived notion that it was a horrid scary kind of book when in fact, it is quite wonderful.

First, you have the invention of the storyline itself. A “crazy” scientist creates a new being, then deserts it after finally realizing “hey, maybe I shouldn’t be playing God.”

Second, the writing is amazing. The story is continually moving forward and each word and each sentence is so beautifully constructed. There were many times when I simply had to stop and say “wow.”

Third and finally, it was just simply more than I originally thought. I think it often gets the rap of being something completely different. Yes, there is a monster and he does do some monstrous things, but the real monster is the man. This isn’t a story about the monster. It is about the man who pushes science too far and regrets that decision. Really, I can’t rave enough.

So yes, I finished Frankenstein and loved every word of it. I think I might even go as far as adding it to my list of all-time favorites (which is around 30 or so books).

I will leave you with a few quotes.

This first is actually one from Shelley’s introduction. I have to give credit to Kyla for pointing it out to me:

“It is not singular that as the daughter of two persons of distinguished literary celebrity, that I should very early in life have thought of writing. As a child I scribbled; and my favorite pastime during the hours given me for recreation was to ‘write stories.’ Still, I had a dearer pleasure than this, which was the formation of castles in the air—the indulging in waking dreams—the following up trains of thought, which had for their subject the formation of a succession of imaginary incidents,” (5).

Just for the beauty of the language:

“O! what a miserable night I passed! The cold stars shone in mockery, and the bare trees waved their branches above me: now and then the sweet voice of a bird burst forth amidst the universal stillness. All, save I, were at rest or enjoyment: I, like the archfiend, bore a hell within me, and finding myself unsympathised with, wished to tear up the trees, spread havoc and destruction around me, and then to have sat down and enjoyed the ruin,” (132).

I love Victor’s musings on life and death:

“Soon, oh! Very soon, will death extinguish these throbbings, and relieve me from the mighty weight of anguish that bears me to the dust; and, in executing the award of justice, I shall also sink to rest. Then the appearance of death was distant, although the wish was ever present to my thoughts; and I often sat for hours motionless and speechless, wishing for some mighty revolution that might bury me and my destroyer in ruins,” (175).

“A fiend had snatched from me every hope of future happiness: no creature had ever been so miserable as I was; so frightful an event is single in the history of man,” (191).

“No guilt, no mischief, no malignity, no misery, can be found comparable to mine. When I run over the frightful catalogue of my sins, I cannot believe that I am the same creature whose thoughts were once filled with sublime and transcendent visions of the beauty and the majesty of goodness. But it is even so; the fallen angel becomes a malignant devil. Yet even that enemy of God and man had friends and associates in his desolation; I am alone,” (213).