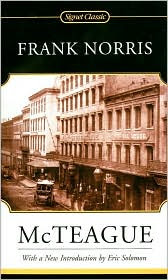 When I was developing the list of classics I was going to work from for this challenge to myself, I showed the list to the literary minded people I know and asked for suggestions. Since many of the other employees at my park are literary nerds as I am, I figured they would be a great help, and they were.

Scott, in particular, was adamant that I add one book to my list. McTeague by Frank Norris. I had never heard of it and had no idea what it was about, but Scott assured me it was a great book and that I would like it.

So, as I began my challenge and began to read books, Scott wanted to know when I would read McTeague. I finally understood that he really wanted me to read it when he brought me his own copy so I could get cracking.

Looking at the novel, I still couldn’t tell what it was about. I am sure Scott told me at some point, but I think descriptions of books run together in my head into one big blur, so I didn’t remember. The back of the book didn’t help me too much, except for hinting that the book was set in San Francisco, there was going to be a lot of social commentary, and that it is an inevitable tragedy.

I have taken it upon myself to learn more, since that simply will not do. Here is what else I have discovered about the mysterious McTeague.

The character of McTeague has no first name and he is a dentist. Of all professions, he has to be a dentist. Ugh.

The novel was first published in 1899, which is a time period where many of my favorite books were published. Frank Norris unfortunately died in 1902 at the age of 32. When he died, he left only McTeague and a few other works for us to read. That alone is reason enough for me to read it. You always have to wonder about the literary minds that die so young. What could they have achieved had they lived longer?

With all this in mind, I begin McTeague. Partly because I want to read it and know what happens to this dentist, but mostly because I was Scott to stop leaving threatening messages on my facebook wall.